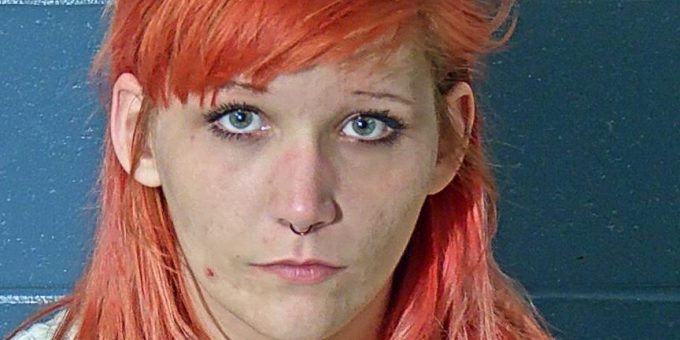 (MITCHELL) – A Mitchell woman was arrested Thursday night after Indiana State Police stopped a vehicle for an equipment and traffic violation.

According to Trooper Chance Humphrey, he was parked in his police vehicle in the parking lot of the Marion Township Volunteer Fire Department when he noticed a 1991 gray Chevrolet S-10 traveling northbound on State Road 37 that didn’t have a license plate light and the right rear tail light was not working.

Trooper Humphrey pulled out behind the pickup and followed it when the driver failed to use a turn signal while making a left turn onto Rariden Hill Road.

Both Brewer and Erdmann were asked to step out of the truck while K-9 Fleck conducted a “free air sniff” search around the vehicle. Fleck alerted police to possible drugs in the pickup.

Officer Cabral located a small glass container that had a residue of a crystal-like substance that field test positive for methamphetamine in the center of the seat between the driver’s seat and passenger seat.

Officer Williams located a plastic grocery bag on the passenger floorboard. In the bag were was multiple syringes and a hard eyeglasses case. Inside that case were more syringes and a glass smoking device that also field-tested positive for meth.

Brewer and Erdmann were placed in handcuffs. Brewer told police the items did not belong to him and that he didn’t know they were in his truck. Erdmann told police that all the items located in the truck were hers and that Brewer did not know she had the items.