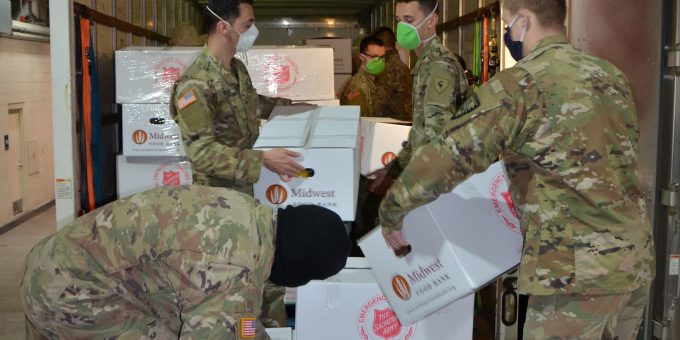 (BLOOMINGTON) – This week, the moving company Two Men and a Truck will have completed delivery of food pallets to be distributed to Southern Indiana families at Salvation Army locations in Columbus and Evansville.

Yesterday, the Bloomington Division of Two Men and Truck went to Lucas Oil Stadium in Indianapolis and picked up pallets to deliver to the Salvation Army in Evansville.

Today, they will pick up pallets at Lucas Oil Stadium and deliver them to the Salvation Army in Columbus, Indiana.

This delivery will complete the second round that the company has made in partnership with the Salvation Army, Indiana National Guard, and Mid-West Food Bank to help provide over 10,000 boxes of food to Indiana families. This second round of deliveries is utilizing one truck and two men to complete the deliveries.

In the first round of deliveries, Two Men and a Truck delivered to Vincennes, Evansville, and Columbus, Indiana using two trucks and four men to complete the delivery.

Thirty-one pallets that contain boxes of food will be delivered in Columbus, Indiana today. Each pallet contains 30 boxes of food. Each box contains enough food to feed a family of five for one week.

The Bloomington Division of Two Men and a Truck is thankful they are able to volunteer to move and store the food for such a great cause.

“This is one of our core values; giving back to our community. And we are pleased to be able to take part in this effort,” said Morgan Nelson, Marketing Manager of Two Men and a Truck.

Headquartered in Michigan, Two Men and a Truck is the largest franchised moving company in North America.

Currently, there are more than 380 locations and 3,000 trucks operating in 44 U.S. states in addition to Canada, Ireland, and the UK. Two Men and a Truck has performed more than 7.5 million moves since its inception in 1985 and has seen consistent growth dating back to December 2009.

In 2018, Entrepreneur Magazine ranked Two Men and a Truck as one of the top 500 franchises in the U.S for the 24th consecutive year and ranked the company No. 1 in the moving/junk removal category for the third year in a row.

In 2017, the company also made the Inc. 5000 list of the fastest-growing private companies in America for the fourth time. Each location is independently owned and operated. For franchising opportunities, visit franchise.twomenandatruck.com.