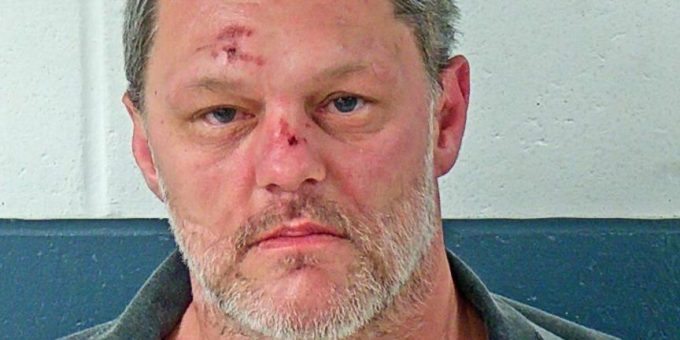 (MITCHELL) – A Mitchell man was arrested Saturday after a Mitchell Police officer found him laying on the sidewalk near the intersection of South Sixth Street and Grissom Avenue with another male standing over him.

Fearing that the male on the ground was in distress, Major Ryan Duckett and Officer Haynes stopped to assist.

Police then noticed that Snapp had suffered a large abrasion that was swelling on his right eyebrow and blood on the sidewalk coming from the back of Snapp’s head.

Police asked Snapp what happened and he couldn’t answer the officers.

An ambulance was requested to the scene. When the ambulance crew arrived on the scene, Snapp became combative with the emergency crew and refused to cooperate with officers and began yelling.

Snapp continued to struggle and fight with officers and was then arrested. Before going to jail he was transported to IU Health Hospital for treatment of his injuries.

Once there he continued to yell at and fight with hospital staff.

At the hospital, officers determined that Snapp has a prescription of Klonopin which was filled on May 8. It was for 90 pills and only 31 remained in the bottle.

Hospital staff determined that Snapp had a blood-alcohol level of 0.282 percent.

After being treated he was released and transported to jail on charges of disorderly conduct, resisting law enforcement, and public intoxication.