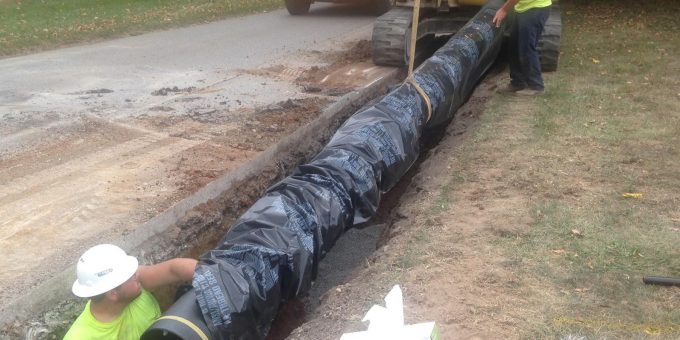 (BLOOMINGTON) – The City of Bloomington Utilities’ (CBU) program to update the city’s water transmission and distribution system proceeds this week with the replacement of a water main near the courthouse square.

Starting today, crews are working in the block bounded by West 6th Street, West 7th Street, North College Avenue, and North Walnut Street, and in the alleys in that block.

Local traffic may be detoured intermittently during construction, which should last about four weeks, weather permitting.  Closures would affect West 6th and West 7th Streets but not Walnut or College.  Drivers are asked to travel slowly, cautiously, and distraction-free through the construction zone and are attentive to lane changes for their safety and that of the workers.

Through an annual $1.7 million investment made possible through a rate increase approved in 2017, CBU instituted a long-term program to replace the city’s aging water infrastructure. The drinking water main that CBU is replacing in this project was installed in 1897 and runs through the alley, a practice that does not conform to modern construction guidelines. While this pipe is the oldest known in the city system, over 75% of the City’s water mains are over 50 years old. This infrastructure investment program was approved by the resident-run Utilities Service Board in 2016 and is made possible by CBU customers.  At the time it was raised, the water fee — which is billed to residential, commercial, and institutional customers across the service area — had not increased since 2011.

During construction, adjacent properties will maintain pedestrian access and customers in the area should expect only one water service disruption when, near the project’s completion, each water connection is transferred from the old line to the new.

“Infrastructure replacement causes temporary inconveniences, but over time our customers will experience improved and more reliable water delivery,” said Utilities Department Director Vic Kelson.  “We are grateful for our customers’ investment in a system that more closely meets our city’s current water needs and anticipates those of the future.”

Water main replacements are prioritized in the following way:  mains with a history of problems will be replaced first, followed by mains feeding critical locations, pipes known to be old or in poor condition, and those in locations already queued for road work.  The 6th Street project is timed to allow the Department of Public Works to proceed with the alley activation and pavement restoration project, one of seven improvements funded through the City of Bloomington’s Bicentennial Bonds.

As are all City employees, CBU crews engaged in this project are being directed to follow CDC protocols regarding physical distancing, hygiene, mask-wearing, and disinfection of vehicles and equipment to protect one another and prevent community transmission of COVID-19.