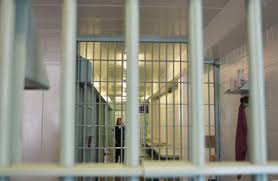 (BLOOMFIELD) – Two Greene County inmates are facing charges after a fight in jail.

The fight happened on at 12:06 p.m. on Thursday, March 19 in G-Pod where both inmates were housed.

Video footage shows the two men talking and then Mitchell using both hands to push Pierce. Pierce then attempts to punch Mitchell. The video shows both men throwing punches. The fight lasted just a minute and ended with both men walking away.

Since the fight, both men have been released from jail. Both were sent summons to appear in court on the new charges. Pierce appeared for an initial hearing in Greene Superior Court on April 22. He entered a plea of not guilty and was appointed a public defender. He is scheduled to appear in court on May 20 for a pre-trial conference at 9 a.m.

Jeremy Mitchell will appear in Greene Superior Court on June 11 at 8:30 a.m.