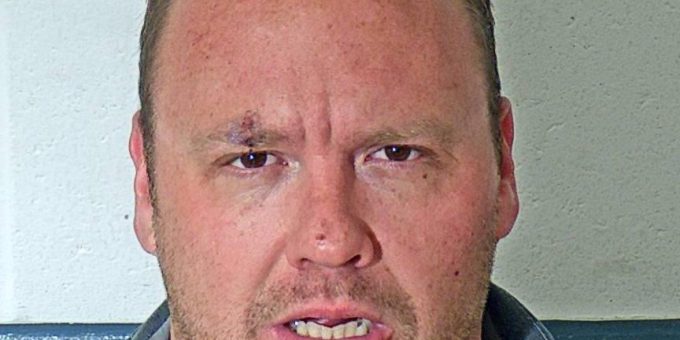 (BEDFORD) – A Mitchell man was arrested early this morning after a pursuit on Mitchell Road.

According to a probable cause affidavit, on Monday night, a Bedford Police officer was on patrol on Mitchell Road when he spotted a red GMC Sierra speeding northbound on Mitchell Road near the Lawrence County Solid Waste Management District.

The officer noticed that the vehicle had only one working headlight and activated his lights to stop the vehicle.

The driver stopped near the intersection of 32nd Street and Mitchell Road.

As the officer approached the vehicle he could hear the driver (Hughes) yelling incoherently about his headlight. Hughes began being verbally abusive with officers. Officers asked Hughes for his driver’s license and vehicle registration. Hughes leaned over to his glove compartment and then stated that he did not have them. Hughes then began saying his name and a series of numbers, but the officer could not understand him because he was speaking rapidly.

Hughes informed officers that his vehicle did not smell like whiskey and that it was blueberry wine that he spilled earlier. Prior to the officer returning to his patrol vehicle, he requested Hughes to shut off the vehicle.

Eventually, Hughes exited the vehicle but then asked the officer if he should assume a position to sexually gratify the officer.

The officer ignored the comment and asked Hughes if he had any weapons. Hughes again became belligerent with the officer making inappropriate comments.

Hughes was asked to perform field sobriety tests but he refused.

Hughes was told to take a seat in his truck but to leave it turned off while the officer wrote Hughes several state citations and a summons to appear in court for violation of his conditional license. While the officer was writing the tickets, Hughes began shouting out of his truck that police were impeding his traveling. Hughes then turned on his truck and put the vehicle in gear and began to drive away.

Hughes finally came to a stop in the middle of Mitchell Road near 19th Street. Officers began giving commands for Hughes to put the vehicle in park and exit the truck with his hands in the air. Hughes refused to exit the vehicle and had to be forcibly removed.

Hughes left the vehicle in drive and the vehicle began to roll away. The vehicle collided into another officer’s patrol vehicle causing damage to the rear driver’s side bumper.

While removing Hughes from the vehicle, he grabbed and scratched an officer’s left arm and kicked another officer in the chest.

Hughes continued to forcibly resist officers and he had to be tased. He was arrested and placed in a patrol car.

Police located a broken glass smoking device that contained meth residue that fell out of the truck. During an inventory of the vehicle, police found a baggie of marijuana, a grinder, and smoking devices.