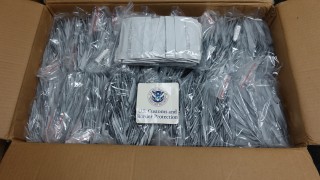 Officers made two seizures of bags which in total contained 4,650 fake test kits. According to a press release issued Friday, the test kits were not approved for use in the U.S. and were turned over to the Food and Drug Administration.

The release did not say whether anyone is charged with a crime because of the seizures.

Officials warn the public to be aware of fake home testing kits for sale either online or in informal settings, and the dangers that may come if the tests are not administered by medical professionals.