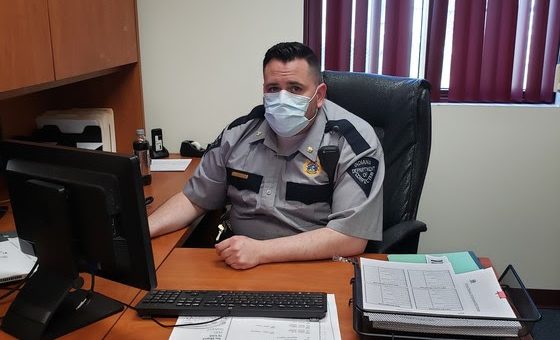 Major Boyan began his career with the Indiana Department of Correction in 2001, as a correctional officer at Indiana State Prison, after receiving an honorable discharge from the United States Marine Corps. He served in many posts over his time at ISP. He worked as a Shift Supervisor as well as utility captain prior to this promotion.

His leadership abilities have been proven through his time working as an adjunct instructor on many subjects including Personal Protection, Quick Response Teams, and Security Skills. Previous tasks include serving as the Safety Hazard Manager, Technical Response Team, and serving on the K-9 Team.

While serving as the K-9 Field Commander he was honored to receive the K-9 Handler of the Year Award presented by the Indiana Criminal Justice Association in 2011. Major Boyan is also a Correctional Police Officer for the Indiana Department of Correction.

Major Boyan commented, “I look forward to the challenge of the new position and I am grateful for the opportunity. I have heard many times here already ‘One Team, One Goal’ and this is an outstanding way of doing business. I like the team spirit here at MCF and will strive to be the strongest link in the chain I can. We have great team members here at MCF and I am proud to be one of them now. I would also like to thank my family for their support in this new endeavor.”

Warden Bill Hyatte commented, “We are very happy to have Major Boyan on our team at MCF. I have a great deal of confidence in his ability to lead. He will be a great member of our team I look forward to seeing what he does for MCF. Thank you for accepting the challenge Major Boyan. One Team, One Goal.”