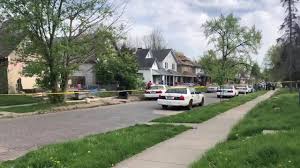 (INDIANAPOLIS) — Police say a mail carrier has died after being shot on the east side of Indianapolis Monday afternoon.

The U.S. Postal Inspection Service is offering up to $50,000 for information that leads to the arrest and conviction of the person responsible for the fatal shooting.

Police said Summers was talking when she left the scene but later died at a local hosptial.

Police still have not caught the suspect.

Police haven’t offered a motive for the shooting, but say they believe it’s an isolated incident.