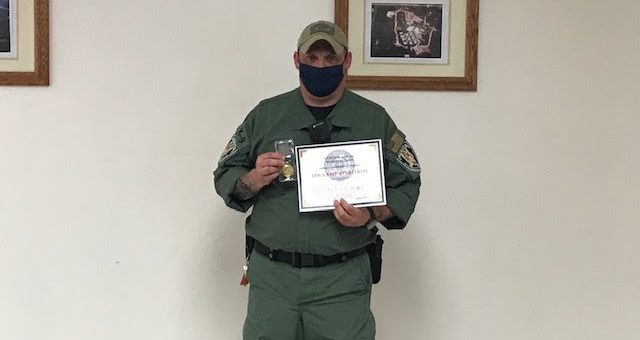 (BRANCHVILLE) – Warden Kathy Alvey and Branchville Correctional Facility would like to announce that Sgt. Dwane Osborne has been selected for the Silent Heroes Award.

On April 24th, Sgt. Dwane Osborne was presented with the first Silent Hero Award, at Branchville Correctional Facility. Sgt. Osborne’s nominations was submitted by Warden Kathy Alvey, for his exemplary leadership and professionalism, during these uncertain times, is what all at Branchville strive to achieve.

Sgt. Osborne, began his service at Branchville on May 22, 2017. His superiors noted his compassion, professionalism, and leadership qualities quickly and responded. He was promoted to Correctional Sergeant on July 29, 2018.

In addition to his correctional sergeant duties, Sgt. Osborne is a Field Training Officer (FTO).  He takes his duties very seriously, and will often be found taking time to work with new employees, teaching them by the best of his ability. Sgt. Osborne is a very determined and hard worker.  Even in stressful and uncertain times he remains positive, enthusiastic, and is willing to help when and where he is needed.  Sgt. Osborne is a leader by example.

Sgt. Osborne is Branchville’s K-9 Field Commander.  A position he stepped into quickly and established himself as a team leader with dignity and determination.  He always answers the call when K-9 is activated.  K-9 Field Command is deployed in times of stress and unease, but Sgt. Osborne handles the pressure with the ease of a true leader.  His interaction with his K-9 team as well as his canine companion show is love and respect for his job and fellow officers.  Emergency Response Operations (ERO) is a vital component to Branchville, and Sgt. Osborne’s willingness to participate and lead, speak to his character, and the type of person he is.

Warden Alvey stated, “Sgt. Osborne is a Silent Hero because of his desire to make the facility a better place, without complaint and often without the recognition he deserves.”  Branchville is taking this opportunity to say “Thank You” to this Silent Hero.