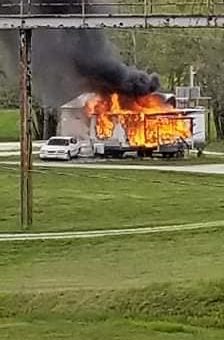 (BEDFORD) – The Bedford Fire Department responded to an RV fire at the Bedford Boat and Sportsman’s Club at 3916 Pumphouse Road on Sunday afternoon.

The alarm came in at 2:35 p.m. with all three stations responding to find an RV fully involved. The fire department arrived within four minutes of the call with three engines and a rescue unit.

“There was no one injured from the blaze,” says Bedford Fire Chief John Hughes. “Firefighters were on the scene for approximately one hour.”