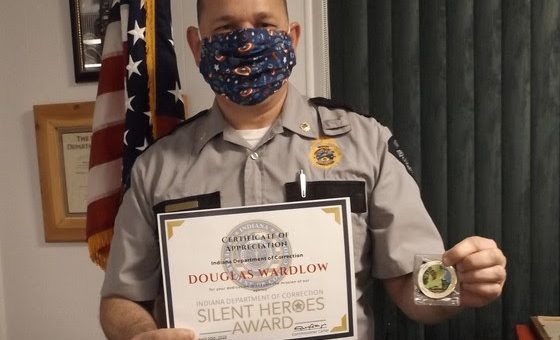 (MICHIGAN CITY) – Although they don’t seek out recognition or accolades, they are the people behind the scenes who help the Indiana Department of Correction (IDOC) operate. Major Douglas Wardlow was recognized as a Silent Hero at the Indiana State Prison.

What defines someone as being a Silent Hero? They are the members of the team who provide support and work behind the scenes to get things done. They are the quiet workhorses who don’t complain, but who rarely appear in the spotlight. These teammates often get overlooked because they care more about their work than their ego. And they make things happen without fanfare or expectation of reward.

Major Wardlow has been the ultimate team player and comes in early and stays late to make sure that everything is running smoothly.  He is a great example of what a leader should look like. He is always visible and helpful to all staff. Since the COVID19 outbreak, he has ensured that all protocols are followed and will show staff how to do things if they are unsure.   He has been instrumental in assisting with the distribution of mask to the offender population. He has also assisted with the temperature check of all individuals entering in the facility.

During this time of crisis, the IDOC knows that it is important to recognize its hardworking staff, especially those who are the true backbone of the Department. Members of the Staff Development and Training Division along with the person who nominated the individuals presented a Commissioner’s Coin and a certificate to each honoree.