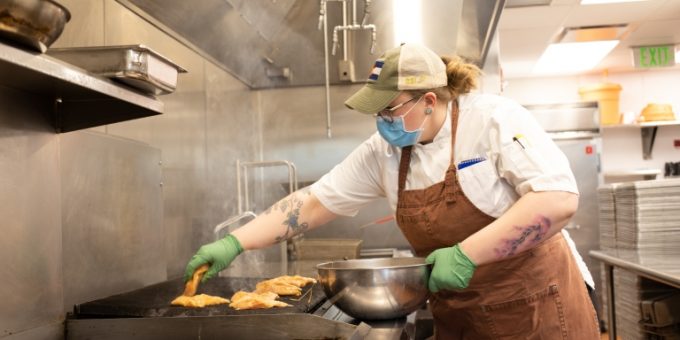 (BLOOMINGTON) – The coronavirus pandemic that has disrupted lives worldwide has left some people in the Indiana University Bloomington community concerned about having enough food to eat.

In response, IU Dining and the IU Food Institute, with the aid of some other campus entities, have started the Emergency Meals Project to provide free meals to those facing food insecurity.

IU Dining’s chefs and staff members are preparing meals Mondays through Fridays at Read Hall, where they can be picked up from noon to 2 p.m. or delivered by Campus Kitchen volunteers.

Those who need a meal can reserve one by filling out a form on IU Dining’s website. Orders must be placed by 10 a.m. the day before the person would like the meal, and a valid IU username is required, said Rahul Shrivastav, IU Dining’s executive director.

Dietitians on staff are helping to ensure well-balanced, nutritious meals are planned, and the cooks will take extra precautions preparing meals if specific allergies are noted, Shrivastav said.

So far, most of the requests have come from graduate students, said Carl Ipsen, a history professor, and the IU Food Institute director.

Conversations that Shrivastav and Ipsen had with members of the graduate and undergraduate student associations confirmed the need to lend a hand. Some students are facing significant challenges, such as being stuck in Bloomington without a job and worried about having enough food to eat.

“This is a tough situation,” Ipsen said.

Joining forces to help seemed like a natural solution. IU Dining had the facilities and staff, which were being underutilized after IU switched to working, teaching, and learning remotely.

The partner organizations just needed to raise money for the cost of the food, because food that was paid for with room and board fees couldn’t be used for the project, Ipsen said.

People can make monetary donations on IU Food Institute’s website to help cover the cost of making the meals, which is about $5 apiece, Ipsen said.

The project kicked off April 10, and information about it was shared by word of mouth, over social media platforms and through department newsletters, Ipsen said. Roughly 40 donations totaling more than $4,000 have been received. That amount will cover the cost of more than 800 meals, he added.

“I’m really thankful for all the people involved in the project. Everyone is playing a part in the effort to meet the need,” Shrivastav said, noting the assistance of donors, Campus Kitchen and David Tallent, the executive chef for IU Dining and Catering.

The first week the free meals were offered, 127 were served, Ipsen said.

“Our patrons included 49 undergraduate students, 73 graduates and five non-students. International students accounted for 45 percent of the total. And 75 percent of patrons confirmed that they had suffered income loss because of the pandemic,” he added.

Ipsen said he wouldn’t be surprised if the number of people served doubles soon.

The goal is to be able to provide meals through the end of the semester, Ipsen said.

Ipsen added that he hopes that donating to this project has a ripple effect in the broader community.

“I hope people are feeling a stronger urge to help, so Mother Hubbard’s Cupboard and other groups get help, too,” he said.

Information by Kirk Johannesen at News at IU Bloomington .