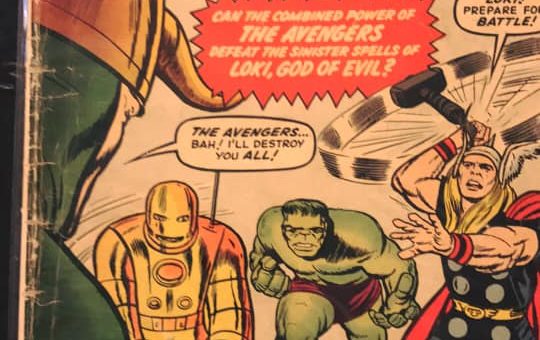 (BLOOMINGTON) – With these uncertain times, Indiana University Kelley School of Business Professor Trent Deckard is reading to the public from his 15,000 comic book collection on Facebook Live.

“I thought, you’re in this room, and you have 15,000 comic books that no one else ever sees,” Deckard said. “What if you were to read a comic book to either children who are home or just adults who want to see me do something silly?”

Deckard got the idea after watching a friend update her situation on Facebook Live. He said that in the worst of situations, he likes to get people to laugh and hopes using the Facebook Live platform will provide entertainment to those stuck at home.

Saturday he will be reading from The Avengers #1 comic book.

Deckard will be live on Saturday at 8 p.m.

His wife, Kyla, holds the camera while he reads the comic book so the audience can clearly see each picture. Deckard even has specific voices he uses to go along with the story.

Deckard loves browsing through older comics. He collects horror, westerns, and over-the-top old, romance comics. His favorite comic genre is superheroes because they remind us of who we wanted to be when we grew up.

Deckard has loved comics since he was a little boy. He said he struggled with reading, so his family kept exposing him to comic books. Reading comics dramatically improved his reading skills and led to his hobby of collecting.

Deckard’s basement has one room full of the 15,000 comics he’s collected since childhood. He hosts his Facebook Live stream from a couch in front of shelves lining the room.

Deckard said most of his comics are first editions, but he occasionally buys reprints. His oldest comic dates back to 1930, and the publish dates of his comics go up from there. While he was fortunate to snag some comics before they got too expensive, the most he has paid for one comic was around $800.

In addition to teaching business presentations at IU’s Kelley School of Business, Deckard also teaches an eight-week comic book class offered through the Jellison Living Learning Center at the Kelley School. The class focuses on comic book artists and writers and the adversity they faced.

Some information gathered from News at IU Bloomington