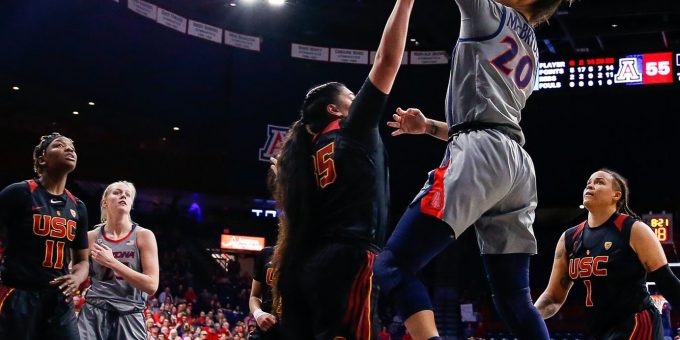 McBryde, who just completed her senior season at Arizona, was signed following the completion of the WNBA draft on Friday night. The 12-team WNBA conducts three rounds of selections.

McBryde will report to training camp with an opportunity to compete for one of 12 roster spots with the Sparks, who have won three WNBA championships in franchise history.

“I’m very happy and excited about this incredible opportunity,” McBryde said. “It’s something I’ve worked toward my entire life and I cannot wait to show this legendary organization what I’m made of.”

The Sparks, coached by former Los Angeles Lakers standout Derek Fisher, went 22-12 in 2019 and lost to the Connecticut Sun in the playoff semifinals.

McBryde averaged 6.9 points and 3.5 rebounds as a defensive stopper for the No.12 Wildcats in 2019-20. Their season was cut short when the NCAA announced the cancellation of the women’s tournament on March 12. She started 25 games (missing six with a right foot injury) and posted season highs of 19 points (against Oregon State) and 10 rebounds (against Stanford).

She shot 51 percent from the field and 40 percent from 3-point range (both team highs) as the first player in program history to record those combined shooting stats.

She was a force for the Stars while helping BNL win back-to-back Class 4A state championships in 2013-14. She graduated with 1,672 career points and a school-record 229 blocked shots and was named to the 2015 Indiana All-Star team.

“This couldn’t be done without all those who helped me every step of the way,” McBryde said.

The Sparks drafted Miami’s Beatrice Momprier (who averaged 16.7 points and 11.4 rebounds) and Germany’s Leonie Fiebich in the second round, then chose West Virginia’s Tynice Martin (who averaged 15.3 points) in the third round.

The WNBA has already postponed the start of training camps and the regular season (originally set for May 15) because of the current coronavirus epidemic. Once the league resumes, McBryde will report to Los Angeles for training camp.