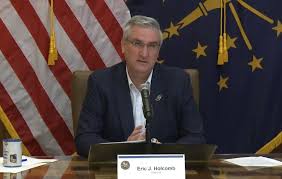 (INDIANAPOLIS) – More than 80 inmates have tested positive for coronavirus at an Indiana prison.

Indiana State Health Commissioner Dr. Kristina Box discussed the growing outbreak at the Westville Correctional Facility in northwest Indiana, saying people in the prison who have tested positive are being isolated.

A man incarcerated in the Indiana prison died of the virus this week, renewing a push by civil liberties groups to release those incarcerated who are at-risk, a move the governor opposes.

During Thursday’s update on the coronavirus pandemic, Indiana Gov. Eric Holcomb said officials are thinking about trying to reopen Indiana’s economy in early May.

He said officials are “looking at the numbers … we want to see these numbers hold.”

Indiana Department of Workforce Development Commissioner Fred Payne said there are extreme volumes of unemployment claims being filed in Indiana. He said there are over 118,000 claims successfully filed, which is lower than the previous week, but one of the highest weekly totals in Indiana history.

Indiana Secretary of State Connie Lawson said her office will be making further recommendations regarding the Indiana primary election (moved to June 2), with a virtual meeting to be held tomorrow.

Lawson said May 21 is the deadline to request absentee voting, and early voting will take place on May 26 and June 1.

Lawson acknowledged that in-person voting will take place on June 2 and that all 92 counties will have personal protective equipment. She said the state is working to educate poll workers on the best sanitation practices.