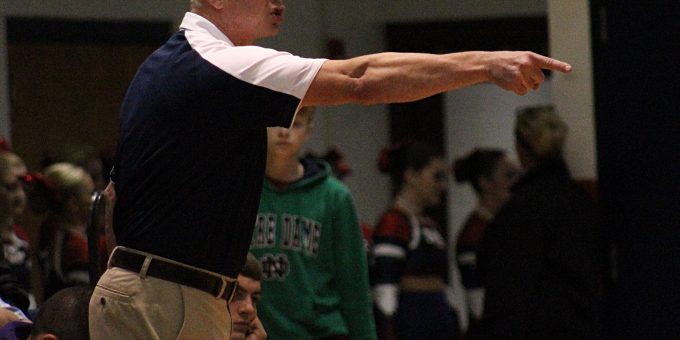 BEDFORD – The annual Indiana-Kentucky All-Star basketball games, an annual event since 1939, was cancelled on Thursday because of the continuing COVID-19 epidemic.

The series was scheduled for June 5 (at Georgetown, Ky.) and 6 (at Southport High School) for the Senior All-Stars. In addition, the Junior All-Star events have also been cancelled. It’s the first time the series has been cancelled since 1943-44 (during World War II).

Bedford North Lawrence’s Jeff Allen was selected to coach the Indiana girls, while BNL’s Chloe McKnight was chosen to compete with the Junior All-Stars.

Allen was named the All-Star coach on March 2. He was selected after leading the Stars to a 133-31 record in six seasons (winning a Class 4A sectional title each year and two regional crowns). He was the third BNL coach chosen for the position, following in the footsteps of Hall of Famers Pete Pritchett (1985) and Dan Bush (1990).

He called each of the team members on the Senior squad to break the bad news.

“I feel bad for those kids,” Allen said. “As seniors, they’ve been short-changed from a lot of exciting and fun moments. Basketball is not the only thing, but the All-Stars are pretty special. You have to feel badly for them, my heart goes out to them. It’s quite an accomplishment to make that team.

“It’s the world we live in. You just have to make the best of it. I think we had a really good team. I was excited about the personnel we had. It would have been a lot of fun.”

It’s also a melancholy moment for Allen, who might not get the opportunity to coach the All-Stars again. He called it one of the highlights of his career when he was named to lead the 2020 team.

“It’s very disappointing,” he said. “The excitement of having the honor to do that was tremendous. Unfortunately, there’s a lot of disappointment all over the world right now, and we have to keep that in perspective. Hopefully we can get back to normalcy before long.

“As coaches, maybe we’ll be in the running since we didn’t get the opportunity. That remains to be seen. I would love to be selected again, we’ll have to see what happens.”

McKnight was named to the Blue Group for the Junior squad and was set to compete in the game against Kentucky. She led the Stars in scoring last season (14.1) as BNL went 21-6, falling to eventual state champion Lawrence North in the semistate.

“It would have been cool to represent Indiana and play with the best girls in the junior class,” McKnight said. “Now we won’t get to play (travel basketball in May), so now the only thing left is July and we don’t know. I’ll have to go outside and shoot in my driveway.”

“This was a big deal for Chloe,” Allen said. “She’s missing the opportunity for the All-Stars, for the travel ball season, as far as getting looks from colleges to play at the next level. You just have to improvise, adapt and overcome.”

With government officials continuing to mandate stay-at-home policies in Indiana and Kentucky, with schools being closed for the remainder of the school calendar year, All-Star officials in both states had little choice when it came to cancelling the events.

“I am sad for the players and the coaches who comprise this year All-Star teams,” Indiana director Mike Broughton said in a statement. “This is a once-in-a-lifetime experience for the seniors who made the team, but they do have the satisfaction that they are an Indiana All-Star for life.”

The series is expected to resume in 2021.