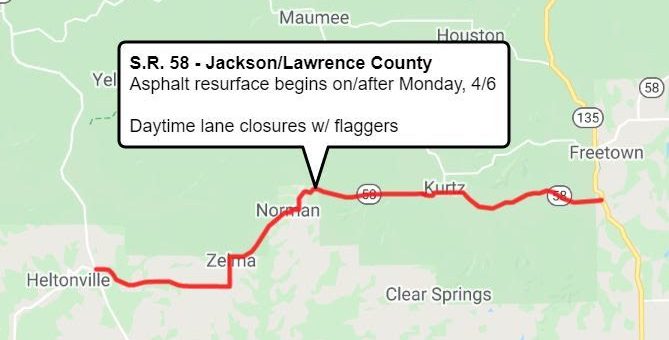 (JACKSON/LAWRENCE CO.) – Work on two INDOT construction contracts is expected to begin next week on State Road 58 in Jackson and Lawrence Counties.

The first, an asphalt resurface, is expected to begin on or after Monday, April 6, on two sections of State Road 58 between Freetown in Jackson County and Heltonville in Lawrence County. The road will be patched, milled and repaved from State Road 446 to the south junction of State Road 135 and through Freetown.

Crews will begin with full and partial-depth patching, followed by milling, which is expected to start in late April or early May. Daytime lane closures will be in effect with flaggers while work is in progress.

The contract was awarded to E&B Paving Inc. in February and is expected to be complete by late August.

The second, a bridge replacement, is expected to begin on or after Wednesday, April 8. The bridge is located just east of Freetown over Brushy Creek and will close for approximately 60 days, through mid-June. The official state detour for the closure will follow State Road 258 to State Road 11 to U.S. 50 to State Road 446. The contract was awarded to Dave O’Mara Contractor last year.

Motorists should slow down, use extra caution and drive distraction-free through all work zones. All work is weather dependent.