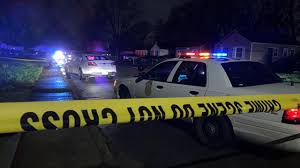 (INDIANAPOLIS) — An 8-year-old Indianapolis boy died after he was struck by stray gunfire when shots were fired into a house, police said Wednesday.

The boy was shot shortly after 11 p.m. Tuesday and pronounced dead at Riley Hospital for Children. The Marion County coroner’s office identified the child as Rodgerick Payne Jr.

Maj. Harold S. Turner of the Indianapolis Metropolitan Police Department said “numerous” shots were fired into the house from the street on the city’s northeast side.

No one else was injured and Turner said he didn’t know if someone inside the home was the intended target.

Police spokeswoman Officer Genae Cook said investigators “don’t believe this child was a target at all.”

Turner said investigators are seeking witnesses who may have heard something, such as a car speeding away, fighting or the gunfire.