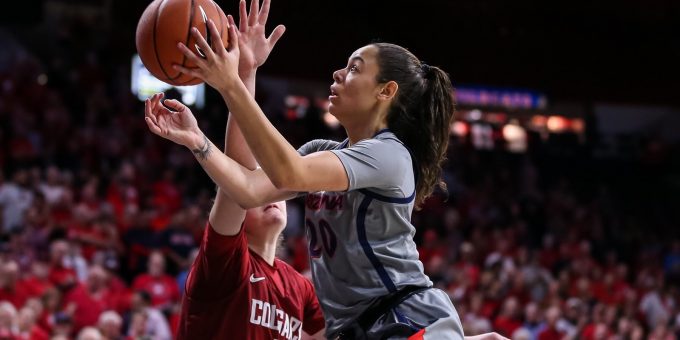 BEDFORD – Dominique McBryde was livin’ the dream. Not in the dull, lifeless, sighing, sarcastic way so many answer when asked about their daily circumstance, but in the real sense of success and happiness. Her life, her immediate future, her possibilities were, to borrow one of her favorite words, “amazing.”

What could be better than being a senior, a starter on one of the top teams in the nation, poised for the ultimate thrill of experiencing the grand stage of the postseason? Everything was almost perfect.

And then, in less than 48 hours, her world crashed, caught in the backwash of an unprecedented national emergency. She was not alone, although it felt that way when her college career ended without fanfare, when she was forced into stay-at-home quarantine in relative isolation as a virus raged against humanity.

From dream to nightmare. From the peaks of the Tucson Mountains to the bottom of the Grand Canyon. Without warning. That’s not the way McBryde, and thousands of college athletes in similar situations, envisioned her final days as a member of the Arizona Wildcats. She would have been killing it on the basketball floor, not sitting on the floor watching CSI Miami and Criminal Minds to kill time.

Life is never fair, and it was especially cruel on March 12 when the NCAA announced the cancellation of the women’s basketball tournament. Games are trivial when a pandemic risks lives, but that does not soften the blow for those who had their goals ripped away like a mugger snatching a purse – powerless, stunned, frightened and angered by the attack.

McBryde and the Wildcats were in prime position for a memorable March. They were ranked No.12 in the country, headed out of the power-packed Pac-12 tournament with a 24-7 record, anticipating a strong seed and a deep run in the NCAA Tournament. Then news of the virus started to spread, and the reactions were swift. This month is now memorable for an entirely different, and deadly for many, reason.

“No one could have imagined it would end like this,” McBryde said. “It finally hit me about a week ago. All this stuff was happening, and it happened out of nowhere, where I couldn’t even react. We were so in shock of everything. My college career was over and I wasn’t going to play anymore. It was very difficult to grasp. I didn’t think it would happen so fast.

Now there’s only the unwinnable “what if” mental games to play.

Before the collapse of the normal, McBryde was enjoying an outstanding season, averaging 6.9 points and 3.5 rebounds in her role as a defensive stopper and senior leader. Under coach Adia Barnes, a finalist for the Naismith Coach of the Year award, the Wildcats were climbing to new heights after winning the WNIT crown the previous year.

“I think that was a huge part,” McBryde said. “We started off where it ended, on an incredible note, building something special. We picked up that momentum and didn’t want to settle for anything less than an NCAA Tournament run.

“We knew from the beginning we could do some special things, but I don’t think it was to the amount we were able to accomplish. It was just amazing. It was an amazing group of people doing amazing things.”

Even when a mid-season ankle injury (which later revealed stress issues in her sore right foot and forced her to miss six games) caused her some angst, McBryde was loving it. This was why she had transferred from Purdue after her sophomore season, to taste individual and team success. It made the year away from game worthwhile.

“At Purdue, I was restricted to playing in the paint,” McBryde said. “If I was outside, it was just to reverse the ball to the other side and dive right back in to set a bunch of screens.

“I felt I could do more, especially since I was a more versatile player in high school. So the year I sat out, I got back to doing what I do best.”

At her best, McBryde was a force as the Stars won back-to-back Class 4A state championships in 2013-14. She graduated as the school’s career scoring leader with 1,672 points (a position since claimed by Jorie Allen) and still holds the career mark for blocked shots (229). She was named an Indiana All-Star.

After the two seasons with the Boilermakers, she blossomed into a complete player with the Wildcats, adding strength to her frame and defense to her game.

“In high school, I wasn’t that great of a defender,” McBryde said with a laugh. “I was taller than most people and I could rely on that to block a bunch of shots. But it was never like I was shutting somebody down. At Purdue, I had to guard a lot of Big Ten post people, so I had to get stronger there.

“At Arizona, that whole year off, I tried to take a lot more pride in my defense because I knew I would have to guard more agile players. I was put in positions where I had to guard every position on the court. I grew more as a leader, I was attacking a lot more and doing more things offensively.”

McBryde suffered the ankle injury on Dec. 2 against Monmouth, feeling fortunate the MRI found the reason behind some foot pain. Had that not happened, she might have done something more serious and been out for the remainder of the year. She came back on Jan. 10.

The Wildcats had a couple of bad late-season losses, and dropped the Senior Night clash with California, lost to Oregon in Pac-12 tourney, but with high-scoring star Aari McDonald, Arizona was eager to hear its name called during the NCAA selection show. Those words were never uttered. Instead, the announcement from NCAA president Mark Emmert was the solemn conclusion.

“I believe we would have had an amazing run,” McBryde said. “It’s hard. I feel badly for the seniors who never had the experience of going through the NCAA Tournament. I had that, which I’m grateful for, but this was one of the best teams I’ve ever been a part of and I knew we could have gone to the Sweet 16. Then this amazing season, and we worked so hard for a tournament run, wasn’t going to happen.”

Not only was basketball taken away, but the entire spring sports calendar was wiped out. The NCAA has granted extra eligibility to the spring sport athletes, but did not extend that to basketball.

In addition, it’s doubtful McBryde (a social behavior and human understanding major, rather ironic for this pandemic crisis and the quarantines) will even get the enjoyment of a graduation ceremony. Schools are discussing a possible online, interactive graduation, but – like so many things from the confines of the living room – it won’t be the same.

“You want the whole thing,” McBryde said. “And it’s all cancelled in the blink of an eye.”

Rather than whine about the luck of her current generation, McBryde has remained busy. She signed with an agent (LivOn Global Sports Management) and plans to play professionally overseas. She’ll seek advice from former BNL teammate Jenna Allen on that subject. Provided, of course, the pandemic finally dies and life returns to some semblance of order. She doesn’t want a virus to be the demise of her dreams.

“Knowing my luck it probably will,” McBryde said with some gallows humor. “I want to keep playing, especially after everything being cancelled. That’s not how I wanted to end my basketball career. I will take that hunger and that drive to keep playing.”