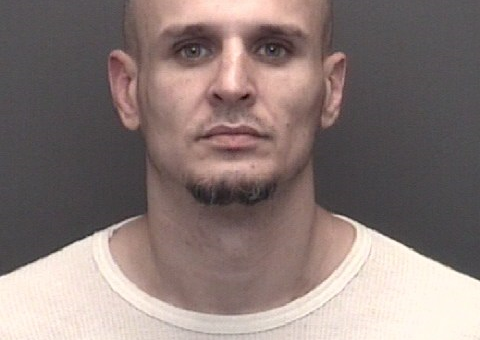 Rafferty immediately activated his emergency lights and siren and attempted to stop the vehicle, but the driver continued south on U.S. 41 before turning west onto Riverside Drive and eventually driving north on the pedestrian and bike trail.

The driver continued north a short distance before veering off the trail and crashing into a wooden fence in the 1200 block of Akin Drive. The driver climbed out of the vehicle through the window and fled west.

There were no pedestrians or bicyclists in the area.

Troopers were able to identify the driver as 35-year-old Matthew Dunn, of Evansville.

Approximately 30 minutes after the crash, a neighbor observed Dunn knocking on a door at a nearby residence. Police were alerted and Dunn was taken into custody without further incident.

Dunn was missing one of his shoes and troopers found the matching shoe inside the Jeep. Dunn was extremely incoherent and exhibiting signs and behavior of someone under the influence of illegal narcotics.

Dunn submitted to field sobriety tests and failed. He was taken to Ascension St. Vincent Hospital where he was medically cleared and then taken to jail.

A blood test was administered and those results are pending.

Upon further investigation, troopers determined the 2019 Jeep was stolen from Audubon Chrysler in Henderson, KY.

Dunn is currently being held without bond in the Vanderburgh County Jail on charges of resisting arrest with a vehicle, auto theft, resisting law enforcement, operating a vehicle while intoxicated, driving while his driver’s license suspended, and leaving the scene of an accident.