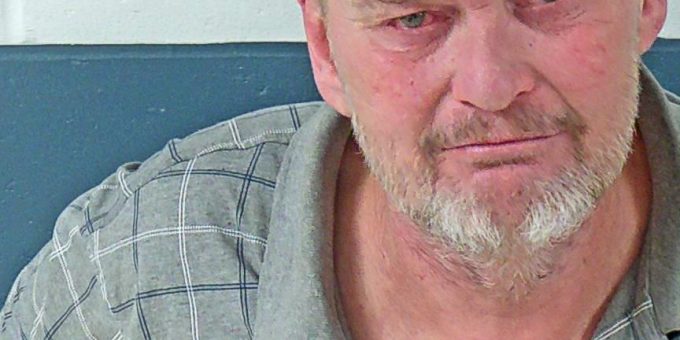 (BEDFORD) – A Bedford man was arrested after he confronted Lawrence County Sheriff’s Department deputies during a call Saturday night.

According to Chief Deputy Aaron Shoults, officers were approached by 56-year-old Bryan Godby on Goosetown Road around 7:40 p.m. as they were clearing another call.

“He was driving a vehicle when he stopped and began yelling obscenities at the officers,” Chief Deputy Shoults added. “The officers immediately suspected that Godby was intoxicated due to his slurred speech and odor of an alcoholic beverage on his breath. Godby was asked several times to stop yelling and eventually threatened to kill a police K-9 that was on the scene.”

Godby was arrested and while being placed inside a patrol car he kicked an officer in the leg and refused to get in.

“Once inside the patrol car he kicked at the doors, windows and the partition and had to be restrained” Chief Deputy Shoults added. “A loaded handgun and a container of alcohol were found inside Godby’s vehicle.”

While being transported to jail, Godby was able to spit on the officer and made several threats toward the officer’s family.

Once at the jail he refused to cooperate with jail staff and officers.

Godby, of 84 Goosetown Rd., is facing charges of public intoxication, intimidation, pointing a firearm, resisting arrest, disorderly conduct, possession of a handgun without a permit, battery against a police officer, and criminal mischief.