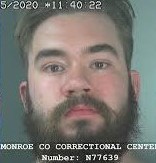 He also is among the first in Indiana to be charged with violating the just-imposed local disaster emergency order, a misdemeanor that carries a penalty of a $1,000 fine and up to six months in jail.

At about 4:20 a.m. on Wednesday, the Monroe County Sheriff’s Department was called to an accident scene on State Road 45. A deputy found a Ford F-150 had left the road and crashed into multiple trees.

The driver, Joseph A. Baker, of 701 South Eastside Drive, was unhurt, but he was taken arrested on a charge of operating a vehicle while intoxicated endangering a person, minor consuming alcohol, operating a vehicle with an alcohol concentration equivalent of .08 but less than .15 and violation of a local emergency order.