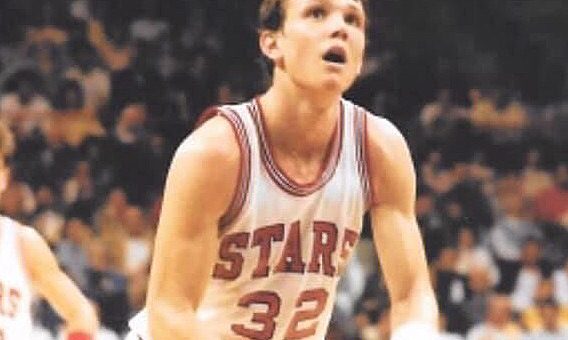 Note: This is the fourth in a series of stories this week on the 30th anniversary of Bedford North Lawrence’s 1990 state championship.

BEDFORD – Until the day he lumbered into BNL Fieldhouse – a tall, powerful man with huge, weathered hands and quick smile, a walking slice of Midwestern Americana – nobody knew who Marion Pierce was.

Perhaps some old-time diehards had heard of the “Henry County Hurricane.” But on the list of the top scorers in Indiana high school history, a register of the legends of Hoosier Hysteria with names like Mount, Shepherd, McGinnis and Alford, of the 20 kids who had scored over 2,000 career points prior to 1989, the guy at the top was a total mystery to most.

And then, 29 years after Pierce slipped into relative obscurity, along came Damon Bailey, who was caught in the eye of his own hurricane and swept up Pierce for a season-long countdown that captured everyone’s fascination. Except for the Bedford North Lawrence senior sensation himself. He could not have cared less.

While Bailey and the Stars were occupied with the obvious chore of winning, everyone else seemed preoccupied with Bailey’s pursuit of Pierce’s mark of 3,019 points. Rephrase that. Bailey wasn’t chasing anything except a championship. The points came as a result of that, not vice versa.

“That whole season, I didn’t worry about it because if we were able to accomplish what we wanted to accomplish as a team, the record was a moot point,” Bailey said. “It was going to happen. I would play enough games and score enough points, as long as we did our job as a group.”

Bailey entered his senior year with 2,162 career points, and many had already wondered if he could set the state record. What was it? And that was followed by “Who’s Marion Pierce?”

Well, Pierce was an outstanding player. Pretty difficult to score 3,000 points and not be. He stood 6–foot-4, and his work ethic matched his stature. He shot outside during rainy days, aiming at a rim he had hammered out of steel from an old Chevy, or turned on the headlights of old cars in his father’s junkyard to shoot after dark. Self-made, this man.

With a deadly turn-around jumper, he averaged 20.2 points per game as a freshman, then led the state in scoring the next three years (34.6 as a sophomore, 36.4 as a junior, 38.2 as a senior). He scored 64 in one game against Union Township (including 50 in the second half). He powered tiny Lewisville (enrollment of 80) to a sectional title win over New Castle in ‘61 and was named to the Indiana All-Star team.

He attended college for one year (Lindsey Wilson in Kentucky) and averaged 32 per game, with a 79-point outburst in one game. Then he quit. Didn’t like school that much. Home-town heart, this man. Fell off the basketball radar. Until Damon Mania unearthed his name.

Suddenly, like the countdown clocks to a NASA launch, everyone was obsessed with Bailey’s total. After every game, the same questions: how many did he have? How far away is he now? When will he break it? The cycle got annoying, aggravating, but it never ceased.

“The scoring record, all of our fans and the fans across the state were interested in that,” BNL coach Dan Bush said. “But I could tell you the kid who was least interested in it was Damon. He probably wanted to get it over with so people would quit bothering him about it.”

As the regular-season ended, with Bailey averaging over 32 points per game, the projections pinpointed the moment. If the Stars won the regional, the record would fall. BNL had to get there first, and that would not be that easy. The Stars were huge favorites but huge targets in the postseason.

First, a rematch with Brownstown in the sectional opener at Seymour. The Braves had pushed BNL to the brink during the regular-season battle, falling in double-overtime as Bailey twice hit clutch shots to save the Stars. No drama this time. Bailey scored 26 (putting him over the 2,900 mark), Alan Bush hit all six of his 3-pointers to total 22, and Ethan Cox added 10 as BNL blasted to a 77-55 win.

Next, another test with Jennings County. Again no problem as Bailey scored 27, Bush continued his ring of fire around the 3-point ring with six more en route to 21, and the Stars cruised to the final with an 82-48 victory.

The championship clash with Seymour was much tougher than anticipated. BNL won by 22 in mid-January, but this was March, and the Owls (even though they had won only 7 games all year) were in upset mode. Seymour owned a 56-54 lead early in the fourth. But Bailey scored 32, Cummings added 16 with some huge shots in the final minutes, and the Stars cut down the nets with a difficult 69-64 triumph.

“That was one of the games that really stuck out in my mind more than any, because it was a potential upset and we were supposed to walk through the sectional,” Bailey said. “We were in a battle with Seymour. I joke all the time, it was one of the games I actually had to try to play defense. They had kids that were killing us, and it was a bad thing when Coach Bush was putting me on someone to stop them.”

The week leading into the regional was the craziest yet. Which is saying something after four years of the whirlwind.

“There was a lot of talk about the scoring record,” Alan Bush said. “But not within our camp. He was business as usual. He didn’t think 10 seconds about that record that week. If we kept playing ballgames, he was going to break the record.”

Storyline: Bailey needed 53 points to establish a new record. Storyline: BNL could face New Albany (one of the two teams to best BNL in the regular season) in the final. Both those were putting the cart before a huge horse, as the Stars first had to dispatch of Charlestown.

Talk about the classic trap game. BNL’s attention could have been diverted in so many directions. The Pirates (21-2) featured 6-8 junior Chad Gilbert (18.9 points and 7.0 rebounds), 6-4 senior John Denney (17.1) and three-year starter Todd Satterly (14.4). Danger lurked.

“The thing is, we played a real good Charlestown team first, and we didn’t even talk about playing New Albany that night,” Dan Bush said. “We prepared for Charlestown. The kids could channel all their focus on what was right in front of them.”

“The first game against Charlestown, we never talked about anything that week other than Charlestown,” Alan Bush said. “That’s the way Dad did things. We didn’t look beyond the game at hand. If we didn’t take care of business, there was no next game.

“But I’d be lying if I said us, as players, weren’t thinking New Albany. We were probably going to get another shot at them. But Dad and Mark (Mathews, the assistant coach) kept us entirely on Charlestown.”

Probably? Hold on. How did it play out? BNL did conquer Charlestown, as Bailey scored 28 points (only 25 more to pass Pierce) during the 65-51 win in the afternoon semifinal. “He’s not Michael Jordan on the cover of Corn Flakes,” Charlestown coach Allan Cundiff said, “because he doesn’t do all that stuff. But he makes everything look so easy.”

And New Albany? Didn’t get there. No rematch. Scottsburg stunned the Bulldogs 48-46 in the regional opener.

“I have yet to figure out how that happened,” Alan Bush said. “That’s the tournament. We wanted to play New Albany again, to avenge that loss. There wasn’t one person in that locker room that didn’t feel that way.”

That night, the talk was The Record. Television cameras poised, the Owls Nest buzzed, overshadowing the fact a game had to be won. Coach Bush sent out for game tapes to learn as much as possible about the Warriors as the Stars holed up in a Columbus hotel and waited.

“For us, the competitiveness we had, that we shouldn’t have lost the New Albany game and wanting to play them again, it was not getting that opportunity,” Bailey said. “The whole thing around the record, as a player, I tried not to think about it. You ride to out it in the back of your mind.”

BNL had little trouble with the Warriors, who were swallowed up in the frenzy. Soon, as BNL went to the fourth quarter with the lead, everyone in the building knew Bailey needed one more basket to pass Pierce.

“We were well ahead, and we talked in the huddle what we wanted to run,” Coach Bush said. “So we decided, let’s run No.1 (guess for who? It was designed to clear out a side of the floor and let Damon attack) and the back door for the lob.”

So with 5:54 left, Chad Mills cut out to the wing and grabbed a pass, looked at Bailey as he cut toward the circle, then lofted the lob toward the rim as Bailey bolted back door and soared.

“We practiced that play a lot,” Mills said. “The nice thing about that was you just had to get the ball up there close, and he was going to go get it. That was the nice thing, having him on the receiving end.

“I guess it worked out. Were we wishing he would have dunked it? Maybe.”

Bailey wasn’t free enough for a catch and slam, but he grabbed the pass and scored. Finally, it was over. The Owls Next exploded. The chase was completed. Damon was No.1, just like the play that was called.

“Scottsburg played it pretty well, but Damon went in between a couple of people and got it, laid it in, and the place went crazy,” Coach Bush said. “For Damon, it was more relief than anything.”

“To do it there, Seymour was kind of a second home for me,” Bailey said. “I had played so many games there (and set his career high with 51 in the 1988 regional), so I guess, if I couldn’t break it at home, I wouldn’t have wanted to break it anywhere else. That gym, and all the battles we had there, the battle with Pat Graham (in the 1989 regional), it was something special to me.”

It was over. But it wasn’t. BNL had two more steps to reach the state finals, four more games to win to claim the coveted state title. And each would be more difficult as the march toward history continued.