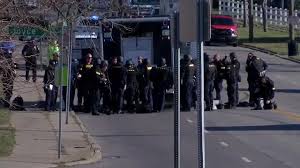 (FISHER) – Two people are dead after a standoff in Fishers on Monday.

It started as a welfare check at the Woods of Britton Apartments near State Road 37 and 141st Street. Multiple agencies responding to a report of a male barricaded inside with a gun.

As officers reached the second story of the apartment, they were met with gunfire but were unharmed.

Officers tried to communicate with the man, but they were unable to.