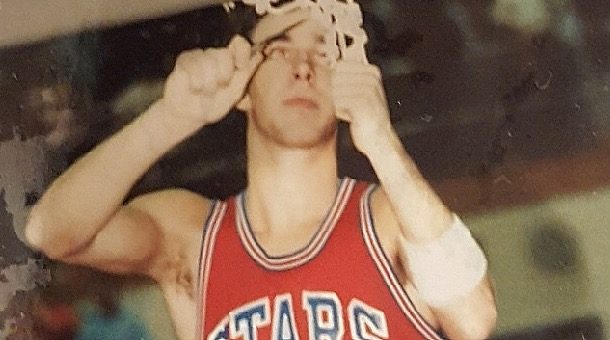 Note: This is the second in a series of stories this week on the 30th anniversary of Bedford North Lawrence’s 1990 state championship.

BEDFORD – High in the southwest corner of BNL Fieldhouse, where echoes swiffer the dust and memories linger like a child standing in front of an open refrigerator, two freshly-minted banners hung in silence, watching the world wander by.

Two outstanding basketball teams were responsible for those memorials. Bedford North Lawrence had been the feel-good surprise of 1987, with a wonderkid stepping into the spotlight, leading the Stars to the Final Four before Marion, finishing a dynasty of three straight state titles, ended the story.

The encore, with more expectations and scrutiny, was a smash hit as well, as the Stars roared through the next season with only one loss before colliding with eventual state champion Muncie Central in the 1988 Final Four.

Twin banners. BNL had been to the summit, just a step from the peak. Another season, another trip to Indianapolis to compete for the grand prize?

No. The Stars were denied the next season as Floyd Central, with 1989 Mr. Basketball and Indiana University recruit Pat Graham, conquered BNL twice, wresting the Hoosier Hills Conference title away before winning a regional semifinal rematch showdown in the battle of superpowers at Seymour.

The Highlanders marched on to the Final Four. The Stars watched that happen with bits of envy and resentment mixed with respect. That, most of them snarled behind forced smiles, should have been, could have been, us.

“That one hurt,” Jamie Cummings said. “And it did feel like it should have been us. We didn’t get to go, and it stung pretty hard. It was absolutely motivation. I had a cup (from the concession stand) from the Floyd Central game, kept in on my dresser that whole year as a reminder.”

So those banners were now screaming in silence. Something was missing. They demanded another to complete the set, and the word “finalist” would not be accepted. As the Stars gathered for the 1989-90 campaign, one goal, one conclusion, one objective united them. Win a state championship.

“The mindset was, for most of us, winning the state championship,” Cummings said. “I don’t think there was any doubt about that. We talked about it a lot, Coach (Dan) Bush always pointed to the banners in the corner and we wanted to hang another one.”

”Going into the season, a state championship was the goal,” Damon Bailey said. “We were able to make it to the Final Four, we knew what it took to get there. Every kid that plays high school basketball, the goal is the state finals, but we really felt we had a realistic chance. We were on a mission.”

“It was our last go-round, our senior season, and our goal was to win the state championship,” Paul Stevens, one of seven seniors on the roster, added. “It was going to be crazy, because it had been so far. So we set our goals and tried to stay the course. If you’re going to set goals, set lofty goals.”

Crazy? In the days before cell phones, social media, recruiting websites and 24-7, non-stop attention, BNL was caught in the maelstrom. Bailey Mania was sweeping the state, overflowing into the Midwest and beyond. Everybody wanted a piece, even if it was just a blade of grass from his front yard or an autograph on a shirt or a keepsake.

It started as an eighth-grader, thanks to the infamous John Feinstein book “A Season on the Brink” and the Bob Knight visits to Shawswick. It exploded with the Sports Illustrated proclamation of Bailey as the best freshman in the nation. It erupted with BNL’s back-to-back banner seasons. Now he was a senior, with something unfulfilled.

So that was the backdrop as Bush assembled his team. Bailey, Cummings, Stevens, Dwayne Curry, Ethan Cox, Ryan Moutardier and Brent Conner were the upperclassmen. Chad Mills and Jason Lambrecht were juniors who would earn starting roles. Alan Bush was the baby-faced sophomore, the son of the coach, the shooter deluxe. Were they ready? They had no choice.

“I guess we had big shoes to fill in some ways, with the people that had left,” Mills said. “The glaring factor everybody knew was we had a great player on the team. I remember one of the first practices that year, it was very clear ‘We will get the ball to No.32’ And why wouldn’t you? That makes perfectly good sense.

“There were some expectations. I don’t know how much pressure there was. We were really just a bunch of guys that liked to play basketball. We thought we had the ability to do what we did. Any time you had Damon on your team, those chances were pretty good.”

Bailey was the superstar, of course. But BNL was more than that, which would ultimately be proven. These were intelligent kids, National Honor Society students. Role players? That does not do them justice. The supporting cast had been tried by fire – probably setting unofficial records of playing before the biggest audiences in junior varsity history.

“One of the things that gets overlooked, we had kids that had moved up from JV to varsity, but it wasn’t the normal kid moving up to the varsity level,” Bailey said. “Every day, they had practiced against a team that was competing for a state championship. Every day, they were going against high-level competition.

“That’s a big reason we were successful at the varsity level. Those guys were ready to step up. With the addition of Alan, someone who could shoot the basketball and spread the floor out, make us all better, it was one less person to help off of, and it created opening for the other guys.

“We, as a group, took it upon ourselves, to go the HPER and play, play against the older guys in the summer who would push us to continue getting better. So there’s no doubt making it again was high on everyone’s priority list.”

The excitement level was at a zenith. BNL tickets would be bartered for Indiana University tickets. The Stars were the talk of the town, the entire basketball-worshipping state. How can anyone function under that much stress? It’s a testament to the mental toughness, starting with Coach Bush, mirrored by Bailey, and reflected by everyone else. There were also buffers in place.

“I knew, from the first day of practice, Dad was going to be harder on me than anyone else, and he point-blank told me that was going to be the case,” Alan Bush said. “Between Dad, and Mark (Mathews, the assistant coach), and even Damon, they did a good job of shielding me from a lot of that pressure and criticism. I never really felt a lot of that, because there were some good protectors in place.”

BNL was prepared, if anyone could be, for the hysteria. BNL Fieldhouse was sold out every home game. The Stars played as many games at neutral sites as they did on the court of the road opponent. Everybody wanted to cash in.

“I don’t know that circus atmosphere is the right word, but the atmosphere we dealt with – the moving of games, playing Salem at Seymour, Carmel at Hinkle Fieldhouse, Terre Haute South at Hulman Center – it did not matter if it was 2,000 seats or 10,000 seats, it was packed,” Bailey said. “We were focused on winning a state championship, so all the other stuff – you can look back on it now, and it was unbelievable – at the time it was just another game for us, another step in what we were trying to accomplish. All the hoopla, it was what high school basketball was all about. I don’t want to diminish that time. For us, we got used to it.”

“We tried to approach it like any other season,” Dan Bush said. “I think the kids did a remarkable job. I tried to keep the kids away from all that, but it crazy for me. I’m glad they didn’t have cell phones and social media back then. And we took everyone’s best shot. They came in ready to play against us.”

So that was the beginning. The strategy was obvious: “We will get the ball to No.32” was overstated, just to “make sure there was no doubt,” Bush said. The journey of a lifetime, a full-court burst through Indiana basketball history, was about to begin. It would be a season like no other.

Next: The Stars take the best from the best