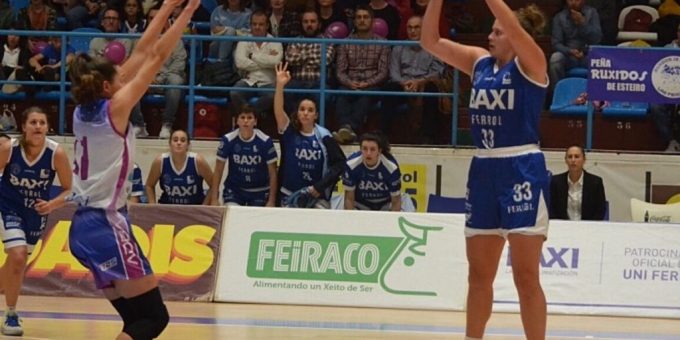 BEDFORD – She started to run, carrying her bags toward the airport gate exit, when she spotted her nervous family. Jenna Allen could not get there fast enough, melting into her mom’s hug and her father’s kisses as a frightening ordeal reached a wonderful conclusion.

Escaping from the European epicenter of the coronavirus pandemic, Allen was home. Indiana never looked so good. Even if the next 14 days were going to be spent in self-prescribed quarantine, there’s no place like home. And Allen felt a lot like Dorothy, caught in the middle of a storm, blown away by a sudden shift in life circumstances, unsure of the new landscape.

After a week of enforced solitude in her apartment in Spain, after a three-day ordeal to secure a seat on one of the last international flights back to the United States, Allen made her joyous, tearful return on Friday morning. No ruby red slippers, just red eyes from lack of sleep and a lot of worry.

Allen’s first season of professional basketball with Baxi Ferrol in the top tier of the Spanish league was cut short by the current virus epidemic. But after watching the disintegration of normalcy, basketball became the least of concerns for the former Bedford North Lawrence and Michigan State star.

“Within a matter of a week, the situation got so severe. It was crazy,” Allen said. “To be in that situation, to be in a foreign country when you don’t speak Spanish very well, it’s scary.”

Spain because one of the world hotspots in rapid fashion. Baxi Ferrol played its final game on March 7, and by March 12 the league was suspended and everyone was ordered into quarantine. According to the most recent statistics, Spain has reported over 25,500 cases of the virus with over 1,370 deaths.

“The infection rate and the way it spread, it’s so easily transferred,” Allen explained. “Ferrol was on complete lockdown. You had to be in your apartment, and you weren’t allowed outside unless you were going to the grocery store or pharmacy.

“And once you stepped outside, the military was patrolling the streets, and they would corner you, ask you where you were going, and they would actually watch you go there and return to your house. I don’t think people understand the severity yet. Spain is the epicenter of the world right now. In Madrid, a person dies every 16 minutes, and that was two days ago.”

Allen faced getting stranded in Spain when the United States announced the shutdown of international flights from Europe. Working with the Baxi Ferrol president and a travel agency, she worked feverishly to find a way home.

“It was really hard,” she said. “My flight got cancelled three times. I had six different plane tickets. I have terrible jet lag because I don’t think I slept for those three days, I was so nervous I wasn’t going to make it. The demand for flights was so low, they would cancel all the flights during the day, then fly out once at night.

“On Wednesday, I was on one of the last flights to the United States. That was the last day they were flying, which was kind of scary. I made it out by my chinny-chin-chin.”

Allen landed in Chicago and went through screening with the Center for Disease Control, which checked for fever and recent contact with a virus carrier.

“I kind of laughed in my head because I was like ‘How was I supposed to know?’” Allen said. “People don’t know. They don’t understand they might have it but show no symptoms until a week later.”

Finally, she made it back to Hoosierland. Her entire family has joined her in home quarantine.

“I’m just thankful to be home,” she said. “It’s nice to be back in good ol’ Bedford. It was an emotional roller coaster. I know a lot of people were praying for me, and I appreciate it. I know it really helped. I feel fine, I feel perfectly great. But I don’t want to risk spreading it.

“I can’t emphasize enough that people need to stay at home, wash their hands, only leave the house if it’s very necessary. The virus is serious – not trying to scare people, but I love my town and my people. So I hope everyone takes it to heart.”

Despite the virus nightmare, Allen plans to return to Spain. Her team was 16-5, and she was averaging 11.5 points and 6.5 rebounds. Her world was wonderful.

“My experience, 100 percent, was amazing,” she said. “I want to play in Spain. I love the people, the culture, the food, everything about it. It’s a beautiful country, the basketball is great, and I loved living there. I’m disappointed it got cut short. I was really enjoying myself.

“I played the 4 spot (power forward), while in college I was pretty much the 5 (center). I love playing the 4 spot, because I was such a hard matchup for a lot of girls. It was easy to post them up or drive on them because I was bigger and stronger.

“Before the virus outbreak, we were in second place in the league, and the top four get to play against each other for a chance to move up to the top league. That’s where you want to be, it’s equivalent to the WNBA because of the competition. So for the season to end this way was disappointing for us.”

If her family survives the close proximity for the fortnight, Allen plans to resume training during the summer and re-sign with Ferrol (or another Spanish team) and return to Spain in September.