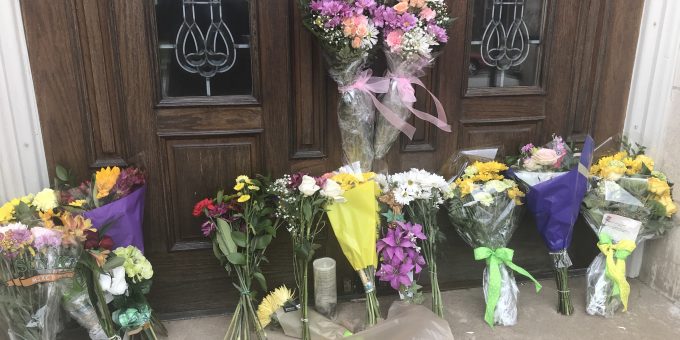 (BEDFORD) – The final arrangements for Father Rick Eldred have not been completed by his family at this time.

However, a few details have been released by Deacon David Reising of St. Vincent De Paul Church in Bedford.

Reising says there will be a private family graveside service.

Father Rick was given the Key to the City of Bedford, last year following 15 years at the parish in Bedford, an honorary Bedford firefighter, and the Circle of Corydon proclamation from Indiana Governor Eric Holcomb.

The Circle of Corydon honors Hoosiers who have made remarkable contributions to the betterment of Indiana and its people, demonstrating through life and service qualities exemplified by the state’s greatest citizens.

The public has been leaving flowers at the front doors of St. Vincent de Paul Church as a memorial to Father Rick.

Father Rick’s compassion for people could be felt throughout the Lawrence County community. He helped organize Becky’s Place and the Men’s Warming Shelter. In addition, he supported Bertha’s Mission. All three organizations helped those in need and showed the love of Christ.

“‘And the King shall answer and say unto them, Verily I say unto you, in as much ye have done unto one of the least of these my brethren, ye have done it unto me.’ This has been our command and we will try to fulfill that command and we try to fulfill our mission of the Men’s Shelter,” Father Rick said in an interview in November at the opening of the Men’s Warming Shelter.

Father Rick, 70, passed away, on Wednesday at 2:49 a.m. after dealing with several health issues.