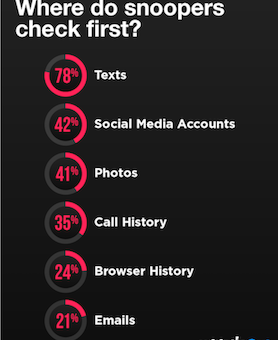 (UNDATED) – Whistleout.com recently conducted a survey that probed the issue of phone snooping between partners.

The right to privacy is an issue most people feel strongly about – especially in the context of relationships.

How Many People Snoop?

According to Trevor Wheelwright of WhistleOut, 50% of those that completed the survey said they’ve looked through their partner’s phone. Roughly half of women (48%) felt that snooping was “okay,” while 31% of men felt that way.

People don’t snoop just for fun either: almost a third (31%) of those surveyed said they would snoop if they suspected something. Only 9% of people said snooping wasn’t a big deal, meaning 91% of people see it as an issue to some degree.

Careful What You Wish For

What Do Phone Snoopers Look At?

Here’s what our phone snooping respondents said they looked at:

Most respondents (68%) indicated they would not be worried about their partner looking through their phones.

The Aftermath Isn’t Worth It

About 38% of respondents claimed that they got into a fight or broke up as a result of cell phone snooping in a relationship:

It’s worth thinking about these stats next time the idea of snooping on your partner’s phone comes up.

WhistleOut partnered with Lux Insights, a market research agency, to survey 1600 people between the ages of 15 and 55 about different aspects of cell phone privacy and snooping in romantic relationships. Lux Insights collected data, which was then analyzed and summarized by a team at WhistleOut.

Information by Trevor Wheelwright of WhistleOut