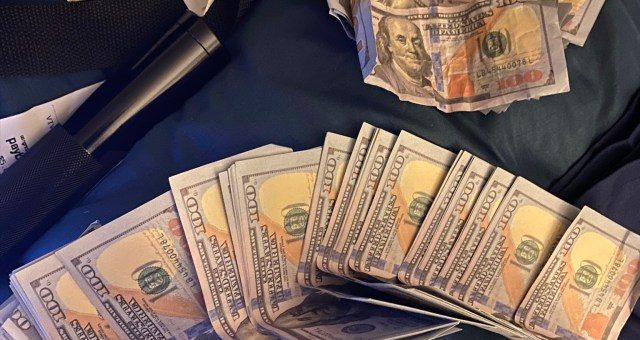 Officials say that the Salem Police Department had been receiving complaints from local businesses over the last few weeks regarding counterfeit bills.

During their search, officers located approximately $7,400 in counterfeit one hundred dollar bills.

The day before, Salem Police Sergeant James Moore was sent to Walgreens in reference to counterfeit money. He spoke with an employee who said they noticed counterfeit money in the drawer. Police reviewed security footage and identified 23-year-old Kyle Heatherly, of Salem, trying to load money onto gift cards.

The cashier told Moore the bills felt “funny and like stick paper,” so she used the money check marker and the mark indicated counterfeit bills. She called the manager to check the money, and then the store trainer. The cashier said Heatherly then requested the money be returned to him and that he would go to a different store. The cashier complied and he left.

Later, Officer Moore was on routine patrol when he noticed a matching vehicle traveling north on High Street. Moore followed the vehicle and found it at the Sunoco Station on Main Street.

During the interview process, Heatherly told officers that Long agreed to buy him some food if he would put money on a card for him.

Heatherly said that he, Long, and another man drove to Walgreens where he put $120 on a card. Long then said he’d found more money and asked Heatherly to go in a second time to put it on a card. Heatherly said he tried and when the cashier told him he had counterfeit money, he looked out the window and saw his vehicle backing up. Heatherly then asked for the money back and left.

Heatherly said he still had the messages between him and Long on his phone. When the police said they would be taking the phone into custody for evidence, Moore said Heatherly became loud and said he would show police the messages but that he didn’t want his phone taken. He then demanded his phone back.

Heatherly resisted arrest and was charged with Level 6 felony counterfeiting and booked in the Washington County Detention Center.