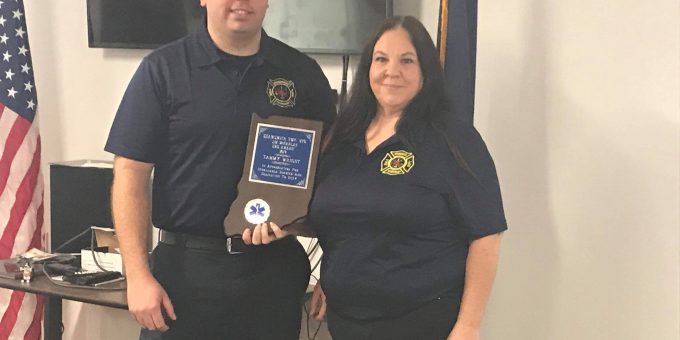 The award was to be given on April 24th during the 17th Annual O’Bannon Engagement Awards Breakfast. However, the awards ceremony has since been cancelled.

Wright has served in various capacities fr each department over the years, taking various firefighting and emergency medical responder courses. Her last course was the National Registry Emergency Technician Course at Ivy Tech Stonegate Education Center in Bedford which she will be graduating in May of this year.

You can find Wright comforting fire or accident victims, pulling fire hoses, fighting fires, or getting information from property owners at fire scenes.

Wright is one of a few women who fight fires and respond to medical emergencies in Lawrence County. Her family has supported her desire to help the community. Her family includes her daughter Amber Sciscoe and her husband Michael, grandchildren Eva and James Siscoe, her son Adam Vester Wright.

“I want to thank Fire Chief Bobby Brown, Training Officer Austin Brown, and my entire department, as well as firefighters throughout Lawrence County who supported me. A special thanks to Don Malone, who instructed the NREMT class at Ivy Tech, as well as Keith and Trisha Rademacher.”

Wright also won the Jim McFarlan EMS Award in December for her EMS service to the community. The late Jim McFarlan was a volunteer firefighter and EMS instructor who served on Shawswick Volunteer Fire Department.