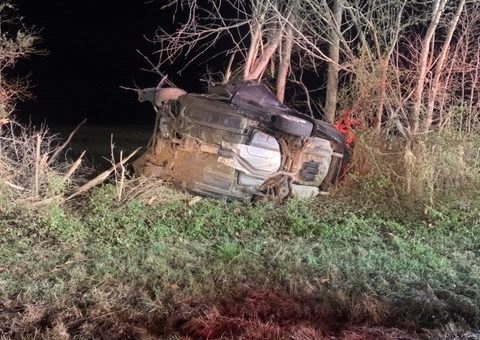 (CHARLESTOWN) – The driver involved in a single-vehicle crash died at the scene of a crash this morning in Charlestown.

Around 12:45 a.m., Indiana State Troopers from the Sellersburg Post responded to the report of a vehicle in the tree line on the west side of County Road 403 near Bethany Road.

When officers arrived, they found the car had left the roadway, overturned and collided with a tree.  Police and fire units immediately requested air medic helicopters and a local wrecker service until the number of occupants in the car could be determined.  After turning the vehicle upright, officers discovered the driver was the sole occupant.

The preliminary investigation reports that the vehicle, a black 2007 Ford Fusion, driven by 35-year-old Robert Oliver Sheckles, left the roadway for an unknown reason before overturning and coming to rest against a tree.

Sheckles died from his injuries at the scene.

ISP Crash Scene Reconstructionists are investigating and the crash remains under investigation. Investigators believe alcohol may have been a contributing factor in this crash.