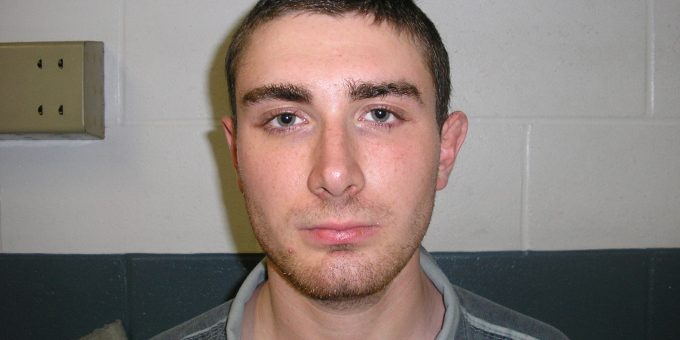 (BEDFORD) – A Bedford man was arrested early this morning by a Bedford Police officer on a warrant on charges of child molesting.

Dustin Carron, 23, of 432 Q St., was booked into the Lawrence County Jail at 12 a.m. on charges of child solicitation, sexual misconduct with a minor, and petition to revoke. He is being held without bond.

According to a probable cause affidavit provided by Lawrence County Chief Deputy Prosecutor Bob Cline, Bedford Police Detectives began their investigation on January 2nd after receiving a report from the Department of Child Services reporting Carron had sent explicit photos of himself to an underage female middle schooler. Police say the girl had also sent photos to Carron.

The girl was interviewed at Susie’s Place, a child advocate service, but she refused to disclose any information about her and Carron’s relationship. The girl did tell police she and Carron would hang out and play around at the park. She said Carron made her happy and that he was a good friend.

She told police her father thought her relationship was wrong because Carron was 10 years older than her.

She said her father believes Carron is a bad guy and a child molester. At that point she was asked why people would think Carron was a child molester and she responded by saying we would find out eventually.

The girl told police she loved Carron and that he loved her.

The girl remained uncooperative and the interview was ended.

Police met with Carron and he admitted to sending messages and photos to the girl. He then admitted to meeting her at Lincoln School and having a sexual encounter. In another statement said he did not have sex with the girl and was evasive with police.

Police did a forensic phone exam on the girl’s and Carron’s phones. Messages, photos, and information from interviews were sent to the Lawrence County Prosecutor’s Office. A warrant was then issued for Carron’s arrest.