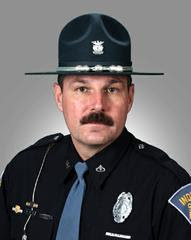 Detective Smith has previously served on several ISP Specialty Teams including the Tactical Intervention Platoon (Riot Squad) and as a Spotter on the Marijuana Eradication Team. Detective Smith has also served as a Firearms Instructor and was a founding member of the Child Advocacy Center, serving as a committee member of Susie’s Place from 2007-present.

Detective Smith comes from a rich heritage of Indiana State Troopers. Smith’s Father, William “Bill” Smith served as an Indiana State Trooper from 1967 to 1998 retiring as a Detective Sergeant from the Indianapolis Post. Smith’s Brother, Major Todd Smith (ISP Legal Office) and Brian have more than sixty years of experience between them as they both actively serve.