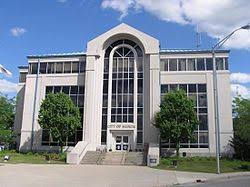 (MUNCIE) — Two women were taken into custody Tuesday after an unidentified white powder – later found to pose no danger to humans – was discovered at Muncie city hall, prompting the building’s evacuation.

Muncie Police Chief Nathan Sloan said police planned to question the women based on surveillance video that he said showed them throwing the powder inside the Muncie City Hall, the Star Press reported.

Sloan said the video captured the women throwing the powder around “with their bare hands.” The substance was found in one of the building’s elevators and on the second and third floors, police said.

“We’re not real sure what their intentions were just yet. We have to treat it with every bit of caution they can,” Sloan said.

He said investigators believe the power was spread through the building about 8 a.m. in Muncie, which is located about 35 miles (56 kilometers) northeast of Indianapolis.

Tests performed on the powder determined by noon that it posed no danger to humans, authorities said.