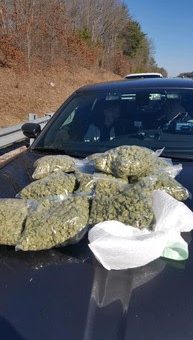 (CLARK CO.) – A traffic stop for an infraction ended with the arrest of both the driver and passenger on multiple charges after police seized approximately five pounds of marijuana.

On Saturday, March 7th, Indiana Senior Trooper Mark LaMaster stopped a black 2012 Mercedes-Benz on I-65 southbound for following too closely behind a semi-truck. He also observed that the car had a large crack in the windshield directly in front of the driver.

As Trooper LaMaster spoke with the driver and passenger, he observed criminal indicators and discovered the passenger had falsely identified himself.

Both were transported to the Clark County Jail without further incident.