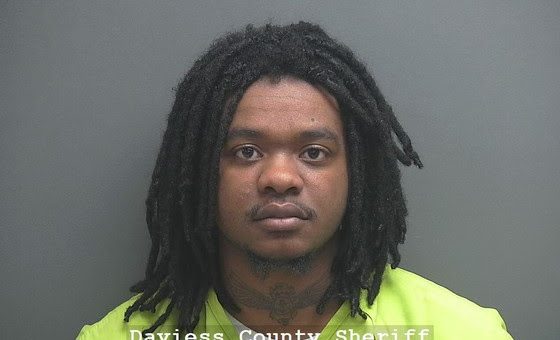 (WASHINGTON) – Two people were arrested after they fled from police and crashed their vehicle on Tuesday night.

At approximately 8:34 p.m., Indiana State Trooper Brayden Angermeier was patrolling I-69 near the 51 mile-marker in Pike County when he used his radar and clocked a northbound 2014 Jaguar traveling at 116 miles per hour.

Trooper Angermeier activated his emergency lights and siren and attempted to stop the vehicle, but the driver continued to travel north at a high rate of speed. The vehicle continued north into Daviess County reaching speeds of more than 150 mph before exiting the interstate to US 150 at Washington.

The driver lost control as he was attempting to turn west onto US 150 and collided into a concrete wall.

Two males immediately exited the vehicle and ran northwest from the accident site. After a brief foot chase, Trooper Angermeier apprehended the driver, who was identified as 34-year-old Benjamin Harrison, of Miami, Florida.

The other male continued to flee on foot. Additional officers from Indiana State Police, Washington Police, and Daviess County Sheriff’s Office arrived and set up a perimeter while Washington Police Sergeant Greg Dietsch and his K-9, Drago, searched the area.

Approximately 14 minutes later the passenger, 23-year-old Jason Joseph, of Washington, was located lying in a field northwest of I-69 near an exit ramp. Joseph was arrested without further incident.

Harrison and Joseph were transported to the Daviess County Jail where they are currently being held on bond.

Harrison is facing charges of resisting law enforcement with a vehicle, resisting arrest, and reckless driving.