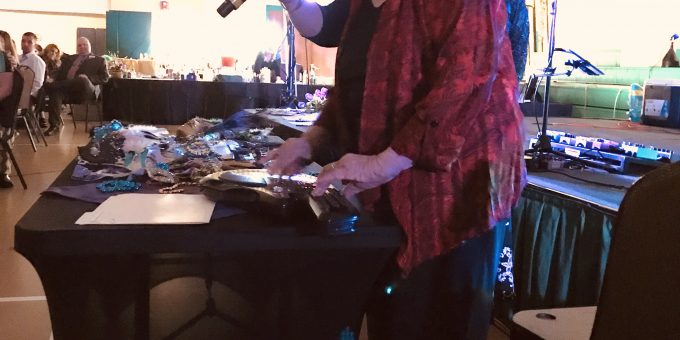 (BEDFORD) – On Saturday evening the Shamrock Center was a night of Shelterbration for the women of Bedford.

Becky’s Place is for women and children who need a place to stay to get out of undesirable situations.

“Unless you have been there, you just do not understand,” said Sister Becky Ryan as she talked about her own situation involving domestic abuse.

Before Ryan went on to share her story, she sang a gospel song titled “Through It All.”

No matter the situation in life, Ryan testified how the Lord helped her through it all. Sister Ryan suffered through domestic abuse and the loss of a son. Through it all, she was able to help others and Becky’s Place has her name attached to it.

Most young girls including Sister Ryan grew up wanting to be a good wife and mother with a handsome and good man by her side.

Ryan says she was nervous when she thought about how this man would ask her folks if it would be okay to come calling and they would court for awhile.

Then one day this great love of her life would ask her parents for her hand in marriage and there would be a grand wedding and they would live happily ever after.

That was the dream, but something went awry for Ryan.

“I got married in 1953 at the age of 23,” Sister Becky said. “My parents didn’t want me to marry him and asked me not to. But, being very young, I thought I knew best. When he was sober he was fine, but when he was drunk he was a monster.”

It was an abusive marriage from the beginning.

“Each time he would come home drunk he would start to fight,” she added. “If I was really lucky I could outrun him. Many times late at night I would have to run and hide, terrified, and not wanting my parents to know. I had cuts, bruises, and black eyes.”

“One day he picked up a brand new car and he came out to my parent’s house. He wanted me to go for a ride with him,” she continued. “He was drunk and my mother did not want me to go. She asked if I could stay with her. He left very angrily and that night he had a wreck out by the Otis Park Golf Course. The top of the car was sheared off. If I was in the car, I definitely would have been killed.”

Ryan’s family was poor but her dad managed to buy her a bus ticket to Los Angeles, California.

Ryan’s father told her that if she did not leave him and get away that he would eventually kill her. So Ryan left for California to stay with relatives and filed for divorce.

A week before the divorce proceeding, Ryan’s husband came to California with his six-year-old son from another marriage and begged for another chance. She agreed to take him back but the abuse continued and was worse than before.

“There were no safe houses to run to back then. No places of refuge,” Sister Becky said. “The final straw came when he came to my workplace on a Saturday. He said his son had a broken leg and needed my help. I left with him immediately. As we drove off, he laughed and said he got a babysitter for his son. We went to the races. He demanded my money. He lost all he had and went into a rage. He said he was going to kill me.”

Becky managed to outrun him and, using the $10 she had hid in her wallet at her mothers suggestion, she rode a train back to Los Angles from the race track. As she arrived at the train station, she felt lonely and isolated from the world. She discovered that her brother Sam had since left to go back to Indiana. In California she had no one to help her.

A man at the train station saw that she was in trouble and befriended her. He said he would not bother her and offered his apartment for her to stay. She stayed for the night and the next day he drove her to a girlfriend’s house.

One day, her husband showed up to the factory where Becky was working. The police responded to the scene and told him to either leave town or he would have to go to jail.

Working at the lab, Sister Becky met a man named Jack Ryan and they became friends.

“Jack wanted to be rich and be a millionaire before he was 40,” she added.

Jack left that millionaire dream in California and followed Becky to Indiana. On his trip there, the trailer that he was pulling caught fire and everything he owned went up in flames.

Living in Indiana was different than life in California. Jack was not accustomed to outhouses and having to carry water to do laundry. Jack was not happy and was having a difficult time finding work. So, Jack and Becky moved to Albuquerque, New Mexico and found work at Dale Electronics.

The Ryan’s adopted four children named Shaunna, Michael, Elizabeth and John while out in New Mexico. Jack ended up owning his own business named R&C Electronics.

Jack and Becky had their share of arguments and there was trouble in their marriage. They discovered that they had different goals. Becky wanted a country life and Jack liked city life. Becky ending up leaving Jack for a short time.

Becky committed her life to Christ during a Billy Graham television program. However, arguments still occurred until Jack himself finally turned himself over to the Lord.

Jack eventually became a minister and the Ryan’s moved back to Bedford.

Together, they wanted to serve the poor and they opened Charity Chapel and Charity’s Chapel Christian Academy on 6th Street between H and I Streets in Bedford.

The stone building became a magnet for children that started being dropped off one or two children at a time. Parents would drop their children off for one reason or another and leave them there.

After false rumors were levied against the Ryan’s, Charity Chapel was eventually closed.

Later, Sister Becky opened a homeless shelter for men and one for women on J Street between 16th and 17th Street. The shelters served more than 250 meals a day up until 2004 when the shelter was closed.

In the following years, Becky’s work did not go unnoticed. Becky’s Place was named after her for all of her hard work throughout the years working with women and men by providing food, shelter, and dignity to those who had fallen on hard times.

Becky’s Place continues to help women and children in need and has served more than 700 individuals. Becky’s Place provides these individuals with the tools to become self-sufficient by helping them find jobs and learn skills to provide themselves with a better life.

“Bedford is generous and the community continues to support efforts through Becky’s Place, the Men’s Warming Shelter, and Bertha’s Mission,” Becky concluded.

Part of the information for this story was gathered in parts from Saturday night’s speech from Becky Ryan and from a book written by Jeanne S. Silvers titled “Two Lumps of Clay In The Potter’s House.”