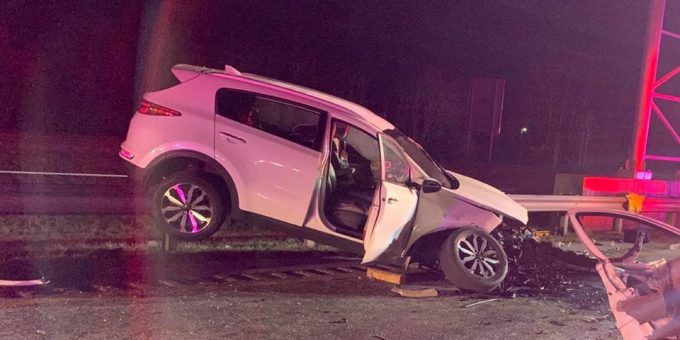 (NEW ALBANY) – A car traveling the wrong way on Interstate 265 yesterday evening in Clark and Floyd Counties collided with another vehicle, killing three passengers and sending two others to the hospital.

Around 9:14 p.m. Saturday, numerous callers reported a White KIA Sportage SUV traveling northbound in the southbound lanes of Interstate 65 from the Lewis and Clark Parkway.  Before police units could respond, the car turned west onto I-265, traveling westbound in the eastbound lanes.   At approximately 9:17 p.m., callers reported a head-on collision involving the SUV and a white passenger car near the 5.4 mile-marker just inside Floyd County.

Officers and firefighters from numerous agencies responded to the scene, including Indiana State Police (ISP) crash reconstructionists.  I-265 was closed from the time of the crash until approximately 12:15 a.m. Sunday, as the investigation continued.

The preliminary investigation reveals that the white, 2017 KIA Sportage, driven by 31 year-old Taylor A. Barefoot, of Louisville, KY, was in the left-hand lane, traveling westbound in the eastbound lanes at the time of the crash.  Barefoot was air-lifted to University Hospital in Louisville with severe injuries.

The second vehicle, a white, 2001 Chevrolet Cavalier, was traveling eastbound in the eastbound lanes at the time of the crash.  The Cavalier was driven by 21-year-old Taylor D. Cole, of Marengo, Indiana.  Cole was pronounced dead at the scene of the crash.

Front seat passenger, 22-year-old Leah Renee Onstott, Depauw, Indiana, was transported to University Hospital in Louisville, where she later succumbed to her injuries.

Two Juvenile passengers occupied the back seat and were transported to Norton’s Children’s Hospital in Louisville.  The juvenile son of Cole was pronounced dead after arriving at Norton’s.  The minor son of Onstott remains at Norton’s Hospital in unknown condition.

Investigators believe alcohol played a factor in this crash.  The crash and possible criminal investigation are ongoing.