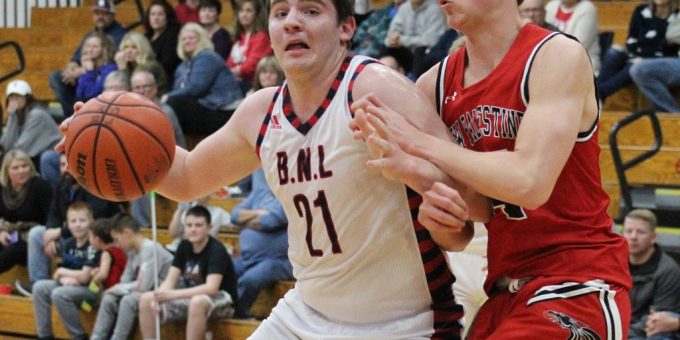 BEDFORD – When the season began, with two losses that fell on the hardwood with the thud of apprehension, optimism around Bedford North Lawrence basketball was as scarce as surgical masks amid a virus outbreak. Nobody dared to breathe.

Doom and gloom? Overblown. From that staggering start, the Stars recovered for one of the surprising, unexpected, remarkable campaigns in the last decade. Who predicted that? Not many.

BNL finished the 2019-20 journey, which opened with more questions than answers, with 15 wins, the most since the 2010-11 group that won 19 and only the second time since 2004-05 that BNL has reached that level. Not bad for a team that had one returning starter, a new head coach and a cast of unknown characters.

The Stars came up short in one key area, which was postseason success. BNL lost a 44-43 heartbreaker to Jennings County in the semifinal round of the Class 4A sectional at Seymour, the fourth straight one-and-done for the program as the sectional title drought extended to 19 years. But nobody was mentioning a sectional run as a remote possibility in November.

“I think we came a long way,” BNL coach Jeff Hein said. “There were times we struggled, there were times I thought we played well. We were up and down, and that’s what you get when you have a group back that’s never played varsity basketball.

“I think the way we were playing in February was really good. Maybe we played too well too early and didn’t hit our stride at the very end. But I don’t think anybody thought we would win 15 games. It was a great season. The kids played hard, they bought in, they were fun to watch.“

After the 0-2 opening, BNL won four straight. After a 2-5 stretch against outstanding competition at the midpoint, the Stars won 9 of the next 11 and came within a last-minute shot of claiming a share of the Hoosier Hills Conference title. The progress, which included wins over league champion Jeffersonville and sectional champ Floyd Central, was easily noticed.

“The kids were playing for each other,” Hein said. “We got about as much out of these guys as we could get this year. We had good senior leaders. They went out and competed every day in practice, they got better and everyone followed their lead.”

The seniors – Brayton Bailey and Zach Sasser – who finished the season will leave a definite void. Each left a mark on the program.

Sasser, the epitome of a role player, averaged a modest 1.2 points in 22 appearances. He had shining moments against New Palestine and Brownstown (scoring a career-high 7 in each), but he earned the title of one of Hein’s all-time favorites for his willingness to work.

“A great kid. He’s a survivor, a kid that ended up being one of two in that class playing basketball,” Hein said. “That’s a credit to him. He went in and gave everything he had every time he had an opportunity.

“He never complained one time in practice. After a win, whether he played or didn’t play, he had the same smile. He just loved being a part of BNL basketball. Those are hard kids to find today.”

Bailey, the definition of a star, averaged team highs of 20.4 points, 7.8 rebounds and 5.6 assists. He was an All-State performer, an Indiana All-Star candidate, in every phase, and he finished second on the BNL career scoring list with 1,579 points.

“He’s arguably the second-best player to ever wear a BNL jersey,” Hein said. “He could do it all.

”The way he distributes, he didn’t have a lot of experienced players around him this year. To average almost six assists a game is a lot. He was able to get the ball where it needed to go, at the right times. Those are the intangibles people don’t see. He could set people up, he wasn’t just a scoring machine. He’s a true point guard. He could jump out of the gym and rebound.

“He’s going to be sorely missed. He’s a great basketball player, and he’s a great kid. I hate to see it end that way (the loss to JC) for him and Zach.”

That’s the bad news. On the flip side, the Stars return everyone else, including four starters and a talented freshman class that worked its way up the depth chart by the end of the season. The experience of juniors Kooper Staley, Ben Cosner and Jackson Miracle, plus the maturity of freshman Colten Leach, will be invaluable going forward.

“These kids accepted roles very well,” Hein said. “They knew what they needed to do and did it.”

The mystery now? Who steps to the forefront? Staley averaged 8.8 points and provided perimeter firepower, Cosner was a steady contributor (6.3) on a wing, Miracle shot 66 percent from the floor and averaged 6.1, and Leach was poised beyond his age while developing into the backcourt defensive stopper.

All benefitted from Bailey’s presence and the defensive attention he demanded. Who becomes ‘the man’ next season? The competition for spots and playing time will be intense.

“I don’t know that I care who ‘the guy’ is,” Hein said. “I would rather, and I’ve said it all year long, my teams have been about balance. I don’t know, in my belief, it’s always that important to have a star. I liked the fact we can be balanced. If we can learn to set each other up and be unselfish, we could have a very balanced group next year. When you have that, that’s when your teams are difficult to stop.

”I didn’t think we had real good depth. I always try to build a bench early in the year, and I never could build the bench I wanted to build. A lot of it was they were just young, not that ready to play. So I like the fact we could have some depth next year. Any time you have competition, it brings out the best in everybody. Hopefully we will benefit some that.”