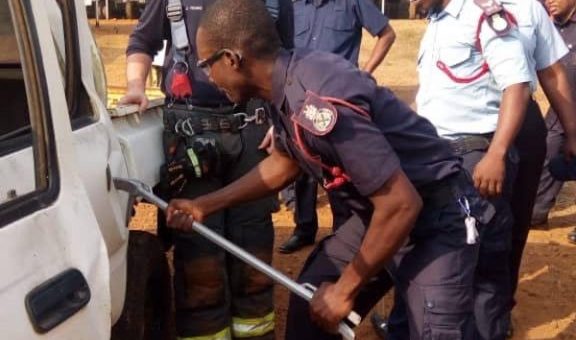 (BLOOMINGTON) – A group of firefighters from the Bloomington Fire Department (BFD) makes its second trip to Freetown, Sierra Leone March 20-30.

Supported by a grant from the U.S. Department of State, administered by IREX, the trip will allow firefighters to continue their collaboration to improve fire safety in the West African country.

During their first trip in February 2019, the BFD group evaluated the resources and preparedness level of the Sierra Leone Fire Force and began sharing expertise, training methods, and prevention practices.

In order to measure the impact of new protocols, Sierra Leone firefighters committed to reporting incidents and outcomes to a new data portal developed as a result of the exchange.

Also during the 2019 trip, Chief Moore advised the Sierra Leone Fire Force in the development of the country’s first national fire code.  Moore collaborated in the drafting process by contributing recommendations based on international building codes and best practices.

A year later, Moore will have the opportunity during the upcoming trip to testify before the House of Parliament of Sierra Leone to urge support for the passage of the code. Also during their stay in Freetown, the BFD group will train their counterparts in emergency medical skills.

Additionally, the BFD will help increase the capacity of the Sierra Leone Fire Force by serving as their liaison to the American nongovernmental organization Africa Fire Mission, whose executive director will participate in meetings with Moore and local civic and safety officials.

The relationship the BFD has already established with Sierra Leone will accelerate Africa Fire Mission’s ability to provide assistance to the country.

“This exchange has led to meaningful change for another community, and offered personal and professional growth for our firefighters, which increases our humility and perspective,” said Chief Moore. “This relationship is one of the ways that Bloomington is serving as a good global citizen, sharing what we know and doing what we can to make a positive impact in the world.”

The connection between the BFD and the Sierra Leone Fire Force was established during a networking session at City Hall for Mandela Washington Fellows studying at Indiana University in the summer of 2018.   In addition to donating equipment, the BFD may pursue an official partnership with their African counterparts through Africa Fire Mission.