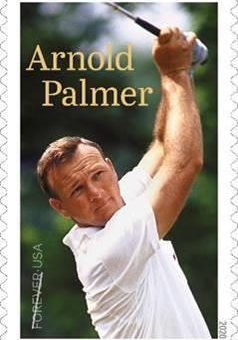 The stamp dedication ceremony took place at the Arnold Palmer Invitational presented by Mastercard at the Bay Hill Club & Lodge.

“Arnold Palmer was not only a great American but also a great golfer. Mr. Palmer was a transformative figure in the game of golf. He made it happen with his charisma, his personality and his rivalries with other golf greats,” said Roman Martinez IV, U.S. Postal Service Board of Governors. “But beyond golf, Arnold was really a great man. He had a great character; he was a philanthropist and a great businessman. He was the perfect role model.”

The stamp features James Drake’s action photograph of Palmer at the 1964 U.S. Open at Congressional Country Club in Bethesda, MD. Palmer’s name appears in the top left corner and the words “Forever” and “USA” are printed along the bottom of the left edge. Art director Antonio Alcalá designed the stamp.

“To have my father celebrated in this way is a true honor,” said Amy Saunders. “It’s something I think he would be proud of as both an individual and as an American, and it’s a wonderful way to preserve his legacy.”

News of the stamp is being shared on social media using the hashtag #ArnoldPalmerForever.Followers of the Postal Service’s Facebook page can view the ceremony live at facebook.com/usps.

The Arnold Palmer stamps, sold in panes of 20, are being issued as Forever stamps, meaning the stamps will always be equal in value to the current First-Class Mail 1-ounce price.

In 1958, Palmer captured his first major title, prevailing at the Masters Tournament. In 1960, he collected his second of four Masters wins. That June, at Cherry Hills Country Club outside Denver, Colorado, he won his first and only U.S. Open championship in dramatic fashion. Fearless late-tournament play, known as the Palmer Charge, soon became his trademark.

Also in 1960, Palmer played in his first British Open Championship, held at the Old Course in St Andrews, Scotland. He finished second in the tournament, which soon grew in popularity among U.S. golfers at least in part due to Palmer’s participation. He won the tournament for the first time in 1961 at Royal Birkdale Golf Club and successfully defended his title in 1962 at Royal Troon Golf Club.

From 1960 to 1963, Palmer was spectacular. In that stretch, his loyal fans, nicknamed “Arnie’s Army,” watched him win five major tournaments and 29 total events. In 1960, Sports Illustrated named him “Sportsman of the Year.”

During a nearly decade-long period beginning in 1958, Palmer led the Professional Golfers’ Association of America (PGA) Tour in yearly money winnings four times; won the Vardon Trophy, awarded to the player with the lowest scoring average, four times; and twice earned PGA Player of the Year honors. In 1964, he won his seventh and final major. The six U.S. Ryder Cup teams of which he was a member won the biennial international competition. He captained the team twice, first as a player in 1963, and then in 1975. Overall, Palmer won 62 PGA Tour events, the fifth-most of all time, and 92 tournaments worldwide.

Customers may purchase stamps and other philatelic products through the Postal Store at usps.com/shopstamps, by calling 800-STAMP24 (800-782-6724), by mail through USA Philatelic, or at Post Office locations nationwide. Forever stamps will always be equal in value to the current First-Class Mail 1‑ounce price. A video of the ceremony will be available on facebook.com/usps.