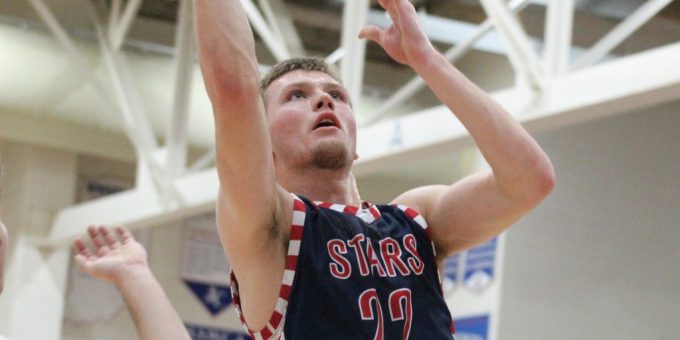 SEYMOUR – The best revenge, according to famous crooner Frank Sinatra, is massive success. Bedford North Lawrence will look to do that its way, as the Stars face a final curtain should success be fleeting in their postseason debut.

BNL will seek vengeance for a regular-season loss when it faces surprise semifinalist Jennings County in the second game of the Class 4A sectional at Seymour on Friday night. Can the Stars stand tall, face it all, and do it their way? The winner will be one step closer to ending a sectional slump.

The Stars (15-9) have waited a week to make their first appearance in Sectional 15, while the Panthers (13-11) debuted with an upset of New Albany in the first round. Jennings will be riding the crest of that momentum into the rematch.

Defending champion Jeffersonville (18-5) will clash with Floyd Central (16-6) in the first semifinal. The two victors will return for the championship collision on Saturday night.

Jennings conquered BNL 74-68 when the two Hoosier Hills Conference rivals locked horns on Jan. 18 in North Vernon, and the setback still stings from the BNL perspective. That’s the most points BNL has surrendered all season, and the Panthers burned BNL’s defense with 10 first-half 3-pointers, with a 16-0 blast in the first half, with a 10-0 run late in the fourth quarter to finally subdue the Stars. BNL has not forgotten.

“It’s a team that’s already beaten us, so it gives us motivation,” BNL coach Jeff Hein said. “That loss was a big loss for us, one of our worst of the year. I don’t think we played well – I know we didn’t defensively. I do think we’re a different team right now.”

Jennings was the aggressor that night with its physical style. Aaron Martin scored 26 points, freshman point guard Keegan Manowitz totaled 19 (including 12 of 13 at the line) and Carson McNulty hit 5 treys and finished with 17 as the Panthers shot 56 percent. The game was marred by 43 fouls and 51 free throws.

Brayton Bailey paced the Stars that night with 28 points, including 13 of 16 at the stripe. Trey Mollet (who is no longer on the BNL roster) had 20 points.

“They have multiple weapons,” Hein said. “They have several kids who can shoot the ball. They have some big, strong kids who are athletic and pose some problems. They are very physical. I’m glad it’s not a weight-lifting competition. We might be in trouble. Luckily it’s a basketball game.”

Jennings unveiled a new threat in the win over the Bulldogs as 6-8 sophomore Jacob Vogel scored 19 points. Just something else for the Stars to worry about.

The Panthers know they’ll have their hands full with Bailey, who’s averaging team highs of 20.5 points, 7.7 rebounds and 5.6 assists. They’ll also have to keep tabs on Kooper Staley (averaging 8.7 after drilling 7 treys at Corydon in the regular-season finale) and Jackson Miracle (6.2). Bailey is the first priority.

Both teams know little about sectional success. BNL hasn’t won the title since 2001, Jennings has been shut out since 2005, and Bailey is the only returning BNL starter with postseason experience. Add the fact BNL could feel some nervousness after receiving the bye to make the semifinal, a fast start could be crucial. Jennings, however, likely will not slow the pace. BNL, should it set the tone early, definitely will.

“There’s something to that,” Hein said. “I’d like to get off to a good start, because we’ve only got one kid that’s played in a sectional before.”

Jeffersonville vs. Floyd Central – In the first semifinal, the Highlanders will seek revenge for a heartbreaking loss. Jeffersonville’s Jacob Jones banked in a 3-pointer from the deep right wing as time expired for a 49-46 win on Jan. 7 at Floyd.

Jones scored 18 points for the Devils that evening. Jeffersonville’s Kobe Stoudemire added 11 points while Will Lovings-Watts (who is no longer with the Devils) had 9.

“I expect a lot more of what we had,” Jeffersonville first-year coach Chris Moore said of the rematch. “That’s a good team. It’s going to be a challenge, and the stakes are higher. They haven’t forgotten. We were fortunate to get out of there. It will be a knock-down, drag-out battle.”

Tre Coleman, the All-State candidate and Nevada recruit who was contained in the first FC confrontation, scored 15 points as the Devils stopped Seymour in the sectional opener.

Floyd’s focus will be scoring punch from junior Jake Heidbreder, who had 21 against the Devils.

“Jake has obviously carried us,” FC coach Todd Sturgeon said. “He‘s been the focal point of everyone’s scouting report and has still managed to score 20 points per game. He’s had a fantastic year. As a coach, there’s nothing you’d rather have than a guy who can score, run the team, break the press. That’s a good place to start.”

The sectional champion will return to Seymour for the second stage of the state tournament on March 14, meeting the winner from the sectional at Columbus in the semifinal of the two-game regional.

Last meeting: On Jan. 7 at Floyd Central, Jacob Jones banked in a long 3-pointer at the buzzer as Jeffersonville escaped with a thrilling 49-46 win. Jones had 18 points for the Devils, while Jake Heidbreder totaled 21 for the Highlanders.

Game notes: Floyd Central is chasing its first sectional title since 1989. Jeffersonville is looking for back-to-back titles for the first time since 2012-13.

Last meeting: On Jan. 18 at Jennings County, the Panthers went on a late 10-0 run to edge the Stars 74-68. Aaron Martin scored 26 points for Jennings, while Brayton Bailey totaled 28 for BNL.

Game notes: BNL is chasing its first sectional title since 2001, while Jennings has not won a championship since 2005.