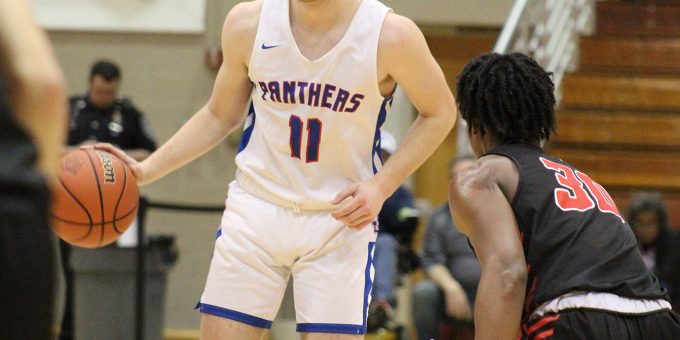 SEYMOUR – Jennings County shook off the shackles of history and posted the first upset of the Class 4A sectional at Seymour.

Jacob Vogel scored 19 points as the Panthers stunned New Albany 59-53 in the first round of Sectional 15 on Tuesday night. Jennings County (13-11) advanced to the semifinal round for a rematch with Bedford North Lawrence (15-9) on Friday.

In the opener, Jeffersonville started its sectional title defense with a 36-29 win over Seymour. The Red Devils (18-5) rolled to rematch with rival Floyd Central (16-6) in the first semifinal. The championship is set for Saturday night.

What did Jennings County pull off? New Albany (14-10) had not lost a first-round game since 2005, and Jennings had posted only one postseason victory over the Bulldogs in program history. New Albany had already logged a 56-43 win at Jennings on Feb. 6.

How did the Panthers do it? Vogel, a 6-8 sophomore who’s coming of age, was a force in the paint, and Jennings kept the Bulldogs at bay with defensive stops and clutch free throws in the final two minutes.

“Not many teams beat New Albany in the sectional – let alone, Jennings County,” JC coach Josh Land said. “This is a sign of the work we put in. There’s been many times we played this game and didn’t believe we could win. Tonight was different.”

Vogel was different, and the left-hander was an offensive star, both from the paint and the 3-point line. Aaron Martin had 13 points, including a huge steal for a layup and 44-40 lead with 3:43 left. And Carson McNulty made 8 consecutive free throws in the final 2:20 as the Panthers pulled away.

“We didn’t force much,” Land said. “We ended up getting good looks. It was a well played game on both ends. Defensively we were a lot better. We changed our scheme a little, helped off people, so it was just good team defense.”

Kaden Stanton paced New Albany with 16 points, Tucker Biven added 12, and Jackson Streander came off the bench firing for 11. That’s two sophomores and a freshman during the bulk of the scoring. That bodes well for the future, but not for the immediate present.

McNulty finished with 11 points as Jennings ended an eight-game losing streak in the series with New Albany and posted its first sectional win since 2014.

Jeffersonville 36, Seymour 29 – Tre Coleman scored 15 points as the Red Devils had to win at Seymour’s deliberate pace. The Owls (8-15), who never met a pass they didn’t like, churned to a 9-5 lead after the first quarter, but the Devils scored the first seven points of the second and never trailed again.

Seymour kept within range as Eric McCoy scored 11 points and Casey Regruth buried two fourth-quarter 3-pointers. But Coleman hit four free throws in the final minute, and Jacob Jones capped his 12-point night with a pair to clinch the win with 20.8 left.

“I wish we had a shot clock for high school basketball. But I don’t think it’s going to happen before Friday night,” Jeffersonville coach Chris Moore said with a laugh. “Don’t look at the record. Playoffs are different. They had a great plan for us. That was a tougher battle than we had three months ago. This time of year, you have to grind out every win.”

Regruth finished with 8 points for Seymour, which is still chasing its first sectional title since 1992.