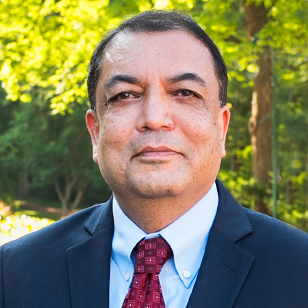 Starting March 16, Acharya will be the associate vice president for research and AI innovation in the Office of the Vice President for Research. In his new role, he’ll develop the new Indiana AI Collaboration Center. The center will facilitate collaboration between IU Bloomington, the Naval Surface Warfare Center Crane, the Indiana National Guard’s new Cyber Battalion, and the Indiana industry on the development of practical AI applications in areas that include microelectronics, cybersecurity, supply chain integrity, and fraud prevention and detection.

Acharya became dean of the Luddy School in 2016 after serving as professor and director of the School of Electrical Engineering and Computer Science at Penn State. In his new role, Acharya will work closely with Fred Cate, IU vice president for research, Distinguished Professor and C. Ben Dutton Professor of Law; vice provost for research Jeff Zaleski; and director of federal research relations Laura Kolton.

Groth, a professor of informatics in the Luddy School, earned his doctoral degree in computer science at IU in 2002. Prior to his term as vice provost, which began in 2014, Groth served in leadership roles at both the Office of the Vice Provost for Undergraduate Education and the then-School of Informatics and Computing — the first of its kind in the U.S. when it was founded in 2000.