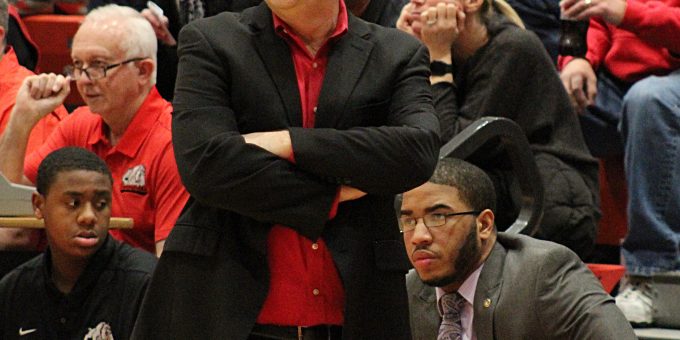 SEYMOUR – Bedford North Lawrence’s quest to end a 19-year sectional title lapse must wait until the first opponent is determined. No matter which team advances to meet the Stars in the semifinal, it will be a foe that already owns a victory over BNL during the regular season.

New Albany (14-9) will clash with Jennings County (12-11) in the second game on Tuesday night in the Owls Nest, with that winner to face BNL (15-9) in the second semifinal on Friday, Defending champion Jeffersonville (17-5) will face Seymour (8-14) in Tuesday’s opener at 6 p.m., with that victor to face Floyd Central (16-6) in the first semifinal.

The championship of this all-Hoosier Hills Conference tournament is set for Saturday night.

The first-round contests have more clear-cut favorites than the potential semifinals in this balanced, unpredictable Sectional 15. Jeffersonville owns a 56-40 win over the Owls earlier this season, while New Albany thumped the Panthers 56-43 during their February collision. After that, anything can happen.

The Devils, the champions of the HHC, have earned the label of sectional favorite, but they have the longest road to another crown. They also have played the last five games without talented sophomore Will Lovings-Watts, although his absence has not cost them any wins since the home loss to BNL in late January.

“You always want to play good ball as the year winds down,” Jeffersonville first-year coach Chris Moore said. “That’s what we’re doing right now. I love the drive and competitive nature of our team.”

Jeffersonville’s regular-season conquest of Seymour came on Dec. 13 at Seymour. Tre Coleman, who has signed with Nevada, scored 20 points and Darin Starks added 14 as the Devils went on an 18-4 run in the third quarter to pull away. Eric McCoy had 13 points for the Owls.

Despite that win and the sectional’s best record, Jeffersonville is not taking anything for granted.

“What’s the next opponent? Let’s not get ahead of ourselves,” Moore said. “We‘re excited about the opponent we have. Don’t look ahead, don’t rest on your laurels about what we’ve accomplished.”

Coleman leads the Devils in scoring (15.5) and rebounding (7.3) while veteran point guard Jacob Jones (destined for Wisconsin-Green Bay) is totaling 13.1 points and 5.5 assists. Jeffersonville has had to adjust with the loss of Lovings-Watts (13.0 points, 7.3 boards).

“We have a lot of guys that can score the ball,” Moore said.

New Albany has a unique blend of experience (two seniors) and youth (three sophomores) in its lineup as coach Jim Shannon looks to lead the Bulldogs to their 13th sectional title since the inception of class basketball in 1998.

Four Bulldogs average in double figures with Tucker Biven (13.1), Trey Hourigan (12.8), Julien Hunter (11.2) and Kaden Stanton (11.8) giving New Albany multiple weapons. In the postseason, the experience of Hunter (a four-year starter) and Hourigan could be invaluable.

“With the experience they both have, it gives our other kids confidence,” Shannon said. “It was tough playing the first two games this year with no seniors (because of injuries), playing until January 4 with only one. The first half of the season was really difficult.

New Albany conquered the Panthers without much drama the first time, rolling to a 30-18 halftime lead. Stanton had 16 while Hunter and Hourigan totaled 11 each. Carson McNulty had 14 points and Aaron Martin added 12 for Jennings, which has not won a sectional since 1998.

The sectional champion will return to Seymour for the regional to meet the winner from the sectional at Columbus (where No.1 Bloomington South is the favorite) in the semifinal of the two-game second stage of the state tournament on March 14.

Last meeting: On Dec. 13 at Seymour, Tre Coleman scored 20 points as Jeffersonville went on an 18-4 run in the third quarter en route to a 56-40 victory. Eric McCoy had 13 points for the Owls.

Game notes: Seymour is chasing its first sectional title since 1992. Jeffersonville is the defending sectional champion. The winner will face Floyd Central (16-6) in the first semifinal on Friday night.

Last meeting: On Feb. 6 at Jennings, New Albany prevailed 56-43 as Kaden Stanton scored 16 points for the Bulldogs. Carson McNulty had 14 for the Panthers.

Game notes: New Albany has won eight straight in the series. Jennings County is chasing its first sectional title since 1998. The winner will face BNL (15-9) in the second semifinal on Friday night.