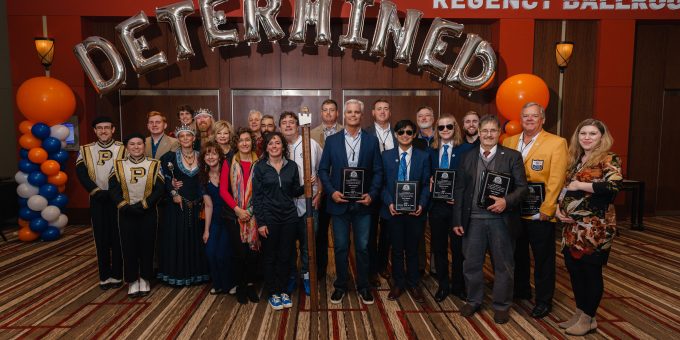 (COLUMBUS, Ohio) – White Castle, America’s first fast-food hamburger chain, inducted 13 loyal fans into its Cravers Hall of Fame today in a special ceremony in Columbus. The 13 inductees, who come from cities across the country, were chosen from more than 250 entries that all showed just how far some people will go to satisfy their crave.

White Castle created the Cravers Hall of Fame in 2001 as an exclusive, honorary club to recognize its most passionate and zealous fans, affectionately referred to as Cravers. Each year, hundreds of Cravers submit their White Castle stories in hopes of being chosen for the Cravers Hall of Fame. Some of the stories are funny, some are poignant and some are remarkable, but all of them are very personal, heartfelt testaments to the ways in which White Castle has touched their lives and created lasting memories.

“Year after year, we’re so so impressed with and humbled by the entries we receive for the Cravers Hall of Fame,” said Jamie Richardson, vice president at White Castle. “White Castle has been such an important and memorable part of so many people’s lives. We love to hear their creative and touching stories about visiting our restaurants and what those visits meant to them.”

The 13 members of the Cravers Hall of Fame’s 19th class were formally inducted during White Castle’s annual Leadership Conference, which was held in the company’s hometown of Columbus. White Castle provided the inductees with complimentary travel, dining and hotel accommodations, and presented them with a celebratory plaque in front of hundreds of White Castle employees, including members of the leadership and operations teams for both the restaurant and retail divisions.

To determine the Hall of Fame’s most deserving Cravers, the judges set criteria based on brand loyalty, creative presentation, originality and magnitude of the crave. In 2002, White Castle added the “Craver in Extremis” category to recognize public figures, celebrities and pop icons, including Alice Cooper, Telfar Clemens, Kal Penn and John Cho, and the late Stan Lee, who have publicly expressed their love of White Castle.

Since the Hall of Fame’s start in 2001, a total of 228 inductees have been honored with this distinguished award.

The Cravers Hall of Fame Class of 2019 features:

Retired Navy Captain Daniel Whalen has loved White Castle for as long as he can remember, but never as much as he did on Veterans Day in 1985. On that day, thanks to White Castle’s “Hamburgers to Fly” program, Daniel’s family was able to get Sliders shipped all the way from Ohio to the flight deck of the USS Kitty Hawk, a naval aircraft carrier positioned in the Indian Ocean where he was stationed as a naval officer. The delivery delighted a lot of sailors. “It was magnificent. The delicious smell was incredible enough, but to actually sink our teeth into these works of art was unreal,” he said.

Twin brothers Mark and Todd Foster combined their love of White Castle and running when they dressed as White Castle employees for the Nashville Rock ‘n’ Roll Marathon. They not only enjoyed pre- and post-race meals at White Castle, but they also ran carrying a few Crave Cases, each one holding 30 Sliders, which they passed out to hungry fans and racers. “We were the most popular dudes in Music City,” they said.

Each year, the members of the sousaphone section of the Purdue All-American Marching Band, who call themselves the “Purdoobahs,” celebrate Slider Day. Held on the day of Purdue’s homecoming, this annual tradition requires all of the sousaphone players to eat White Castle cheese Sliders before the football game. Everyone gladly participates, together consuming 300 to 450 Sliders. Zach Townsend, a member of the Purdoobahs, says one lucky senior even gets to sneak a Slider onto the field and eat it during the band’s halftime performance.

Kayla Gray grew up eating White Castle Sliders with her Dad, whom she calls her “Crave King.” She simply loved the taste of the steam-grilled beef patties. When she was 15, Kayla had brain surgery. The operation took a toll on her body; she tried eating but couldn’t keep anything down. Facing yet another procedure to get much-needed nutrients into her body, Kayla ate her favorite meal – four Sliders and fries. And for the first time since the surgery, her body didn’t reject the food. “White Castle literally saved my life,” she said.

As a college student with a fondness for White Castle, Micah Bahnfleth couldn’t believe that some of his college friends in Omaha, Nebraska, had never eaten the small, square Sliders. So he took several of his friends on a late-night road trip to the nearest White Castle – a mere 310 miles away in Columbia, Missouri. The trip became legendary among Micah’s friends, so he made the 4-1/2 hour trip a few more times, introducing more than 30 people, including his wife, to the great taste of White Castle.

Following a tradition started by his parents when he was a child, Gary Cowan would stop at White Castle restaurants while taking road trips with his wife, Marybeth. She’d always order a single Slider, and he’d get a double cheeseburger. Marybeth passed away nearly nine years ago, but Gary goes to White Castle every year on August 7, their anniversary, and places that same order. “Eating at White Castle will never be just food to me,” Gary says. “It will be a link to everything in my past that has given me a sense of joy and belonging.”

Friends Dayton Porter and Sean Nguyen were indulging in a late-night Crave at a White Castle near their home in Sterling Heights, Michigan, when they noticed a poster in the window. Enter the “Capture the Crave” photo contest, the poster said, for a chance to win free White Castle Sliders for a year. With little hesitation, the two friends decided to enter the contest. Their photo, showing the boys wearing matching suits and ties while leaning against a nice black car eating Sliders, won first place – and all the Sliders they can enjoy.

Growing up in Ohio, Anna Williams had unlimited access to White Castle’s delicious Sliders. Now, she lives in a small town north of Ketchikan, Alaska, and the closest White Castle is about 3,000 miles away. Fortunately, her local grocery store carries White Castle frozen Sliders, and she and her husband take full advantage of the opportunity. Pregnant when she submitted her Hall of Fame entry, Anna said her White Castle cravings had gotten out of control and she just couldn’t get enough Sliders.

Ben Campbell has been a huge White Castle fan since 1985 when he was a teenager living in Nashville. A friend introduced him to the brand, saying, “It’s like nothing you’ve ever eaten.” Ben says his friend was right. “I maintain the double cheeseburger is a legend in a bun,” he says. Now a DJ in Phoenix, the dedicated Craver was so excited for White Castle’s arrival in Scottsdale that he broadcast his morning show live from the new restaurant on the day it opened in October.

Jamie and Drew, who both grew up as White Castle fans, were the very first customers at the Scottsdale White Castle when it opened in October 2019. Now living near Scottsdale, the two of them arrived at the new White Castle in an RV and camped out in the parking lot for 96 hours to make sure they got the first spot in line. Dressed in medieval clothing, they looked like royalty as they placed the very first food orders at the newly opened restaurant. White Castle’s leadership acknowledged their dedication by letting them cut the ribbon at the opening ceremony.