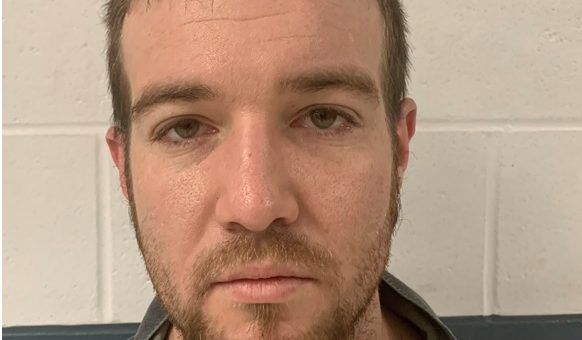 (SPRINGVILLE) – A Springville man was arrested on domestic battery charges after he injured his girlfriend during a domestic fight Wednesday afternoon.

According to a probable cause affidavit provided by Lawrence County Chief Prosecutor Bob Cline, Lawrence County Sheriff deputies responded to the 2700 block of Spencer Pike Road at 12:50 p.m.

When deputies arrived an adult female stepped out the back door. Deputies said the female appeared to be visibly shaken.

The woman told police that Kimmel was inside. One deputy went inside and placed Kimmel in handcuffs.

As Kimmel was being placed in the police car, he told police he didn’t touch the female and that she had hit him with a barstool.

The woman told police their neighbor had stopped by and asked for help to move a dresser. The woman told the male that Kimmel was asleep.

The woman went back to the bedroom and Kimmel asked her who she was talking to. The woman told him. She told police she then went to the kitchen to warm up some chili and Kimmel got angry.

The woman says she then asked Kimmel to take the dog out and when he refused she asked him again.

The woman told police Kimmel charged at her and punched her repeatedly in the stomach while she stood by the bed looking for her cigarettes. This caused her to fall.

The woman told police she tried to leave the room and Kimmel slammed the bedroom door, and it hit her right hand and wrist and bounced back and hit her in the head. She also told police Kimmel had threatened to kill her.

The woman told police her stomach, hand, and wrist were sore from the altercation.

The woman told police she didn’t want Kimmel to get in trouble because he already has other legal issues over the battery of his grandfather.

Kimmel stated the woman had been saying all night and earlier in the morning she was going to get him arrested for, he assumed, leaving and going north to his father’s house.

Kimmel said the woman flipped out and began hitting on him. Nathan stated she was acting crazy which is why he ran over to her. Nathan stated he attempted to get away from her, but she kicked the bedroom door open. Kimmel stated the woman hit him with a barstool and threw a heater at him as well.

Kimmel said his face was sore from the beating he received from the woman. Police said he did have small scratches near the outside of his left eye and a small knot above his left eye.

Kimmel told police the table broke because he sat on it.

Kimmel told police he wanted to file charges against the woman.

The deputies went back inside and found the heater was still running and sitting upright while both barstools in the bedroom stood upright with no apparent signs of having been moved or thrown.

Police asked the woman about the two holes in the bedroom door and the woman said they were a result from Kimmel punching and kicking the door in an earlier incident.