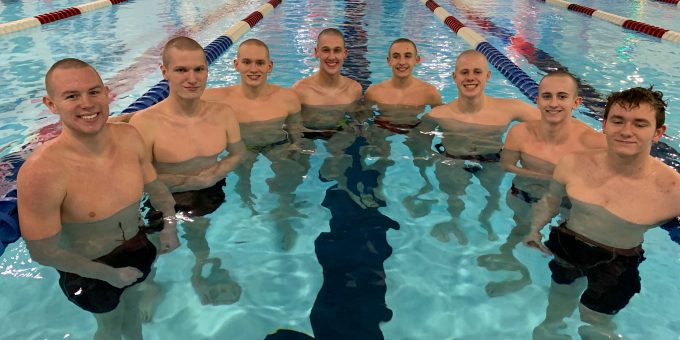 BEDFORD – Bedford North Lawrence coach Terry Tlustek, not known as a wild-eyed gambler, rolled the dice, deciding to train the Stars toward a peak performance for the IHSAA state finals. His team made that move pay off.

After recording nine victories in 12 events during the sectional at Jasper, BNL will report for the preliminary round of the state meet on Friday night with a huge contingent that’s set to make a big splash on the biggest stage.

Rested and revved, the Stars will be chasing tickets to the state final (the top eight from prelim qualifying) or consolation (places 9-16) races in five events and three relays. The finals are set for Saturday afternoon at the Natatorium on the IUPUI campus.

That pool is known for its speed, and BNL will count on that, plus a boost from the taper training process aimed at this meet, in order to leap up the seeding charts.

“To a certain extent, taper is a bit of a gamble,” Tlustek said. “Some people react to it differently. I’m hoping they hit their stride.

“Most of these kids are tapering for sectionals. The teams that aren’t are the big teams that are always competing for the top five. That’s the thought, that most will be past their peak, and we’ll be ready to go.”

The Stars, according to the numbers and times from the sectionals across the state, have some work to do and time to make up. Jacob Werley is the highest seed, 12th in the 50-yard freestyle in 21.03 (a school record), and he’s 15th in the 100 free in 46.29.

“Both of them are capable of making the top eight in both their events,” Tlustek said. “It’s just so close, it all comes down to execution.”

Experience will also be a factor. Both are veterans in the noise and chaos of the state meet. BNL has not had an individual in a final since Taylor Sanders in 2009.

“It definitely helps with the pressure,” Swenson said. “It’s a high-pressure atmosphere, with a lot of people cheering and screaming, so it’s a lot easier – being my fourth time – to go into that situation. It’s something you get used to over time.”

“I’m just trying to get into the top eight, mainly in the 50,” said Werley, who is only .13 seconds away from the eight seed in the fastest race. “That’s where I have the most fun and do the best. I try not to worry about it. If I start to worry, I’m more likely to make a mistake.”

That’s a big workload for many, although the multiple heat races in each event with allow for some extra rest time.

“I have no idea what will happen,” Swenson said. “My main goal is to have fun, enjoy the people around me, see I can improve some the small things in my races.”