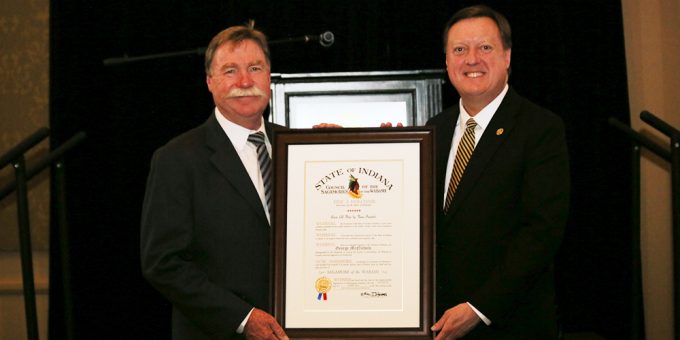 (BEDFORD) – George McNichols, former President/CEO of Hoosier Hills Credit Union for 35 years, was honored with a Sagamore of the Wabash Award during a dinner event held in honor of his recent retirement from HHCU.

Indiana State Senator Eric Koch presented the award on behalf of Indiana Governor Eric Holcomb, who was unable to attend. The Sagamore is the second-highest honor bestowed by the state of Indiana. Among those who have received Sagamores are astronauts, presidents, ambassadors, artists, musicians, politicians and ordinary citizens who have contributed greatly
to the Hoosier heritage.

“I can’t begin to express how honored I am,” McNichols said after Koch’s presentation. “I was taken by complete surprise, but I am also incredibly moved by this gesture by Gov. Holcomb. Plus, I can’t think of a better group of people with whom to share this.”

“George’s story is a perfect example of what has made credit unions the best financial option for many individuals and commercial ventures over the years,” Markley said. “People like George not only understood the member-driven cooperative model throughout the years, but they had vision and courage to lead and innovate.”

Under McNichols’ leadership, the Hoosier Hills Credit Union focused on maximizing member value, while managing costs. That business philosophy helped build substantial growth for Hoosier Hills Credit Union. In fact, during the years McNichols was CEO of HHCU, the Credit Union grew from less than $10 million in total assets to more than $610 million, from 2,500 members to more than 30,000 members, and from nine employees to the current 180. Because of his innovative leadership and his significant involvement in the credit union industry statewide and nationally, McNichols was named to the Indiana Credit Union League Hall of Fame in 2015 and served several terms as chair of the ICUL Board of Directors during his tenure on that board.

In 2016, then-Governor Mike Pence appointed McNichols as the first credit union executive to serve on the Board of Depositories for the State of Indiana. On the national level, he was a member of the Credit Union National Association’s (CUNA’s) Governmental Affairs Committee from 2011 to 2015 and a member of CUNA’s Kitchen Cabinet, a national task force to explore alternative structural options for credit unions in the United States.

Others who spoke at the event of McNichols’ impact to HHCU, the credit union industry and the community were Jennie Edwards, Chair of the Hoosier Hills Credit Union Board of Directors; Ruth Ann Elkins, HHCU Vice President of Bedford Operations and long-time HHCU employee; John McKenzie, President of the Indiana Credit Union League; and Shawna Girgis, former mayor of the City of Bedford.